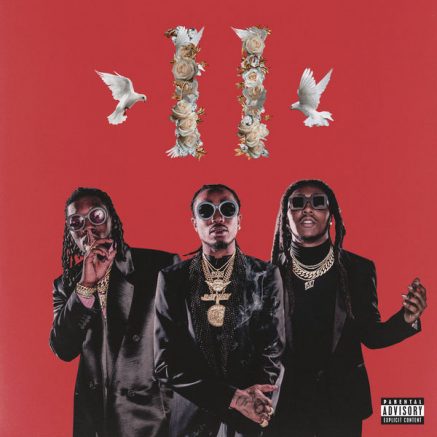 Well, it took a year for hot hip-hop trio Migos to release its third studio album, “Culture II,” since last year when the group debuted “Culture.”

The long, but short-awaited “Culture II” dropped Jan. 26. The album release was highly anticipated by critics and rap fans, but there was also some doubt about the album, feeling too rushed and released too soon. That’s what it felt like listening to it; not enough effort, leftover tracks, too similar.

This album isn’t the best the group has done, nor, hopefully isn’t the worst. The group was nominated for Rap Performance with “Bad and Boujee” and for Best Rap Album with “Culture” on Sunday’s 60th Grammy Awards.

The Migos are from North Atlanta and the group — whose members are all related — consists of Quavo, Offset and Takeoff. Quavo blew up in 2017 by collaborating with many popular artists, such as hooking up with Travis Scott to make their own album, “Huncho Jack, Jack Huncho,” which was released just a few days before Christmas. The album did great and even created more promise for “Culture II.”

Although the group’s southern trap music, along with autotune can be catchy at times, there are also times when the songs are too lengthy, because all three rappers have verses and the group fits the chorus in between each of them. It’s also significant that Takeoff (who was left off “Bad and Boujee” for Lil Uzi Vert, and who speaks the least when the group is in public) gets the shorter verses because of time.

On “Culture II,” there are also a few songs that sound like more or less remakes from their previous album, such as “Open It Up” from “Culture II” and “Deadz” featuring 2 Chainz from “Culture.” Both have a similar intro to the track and ultimately, have almost the exact same chorus, both by Quavo, but with different lyrics.

The album’s opening track “Higher We Go” notes that the group will continue to strive and be at the top in the rap game. “Walk It Talk It,” featuring Drake, is one of the hotter tracks on the album, as Drake raps “We been brothers since Versace bando woah.” He is referencing Migos’ 2013 hit single “Versace”, which was so big that Drake mixed it and ultimately blew up the Migos. Lastly, in the track “Work Hard,” Migos rap about the group’stroubled early life, working hard so they will never have to return to that life, focusing on their music and staying famous.

Migos can surprise many listeners with some deep love tracks that switch it up and get away from their trap, sex, and drug use style. A track like “Gang Gang” on “Culture II” has only Takeoff and Quavo providing the lyrics, rapping if Takeoff ran away with a girl but possibly the group too. But then in the chorus, Takeoff says he’ll do anything with his gang. It is an unexpected track on the album that’s different from what the Migos usually make. Takeoff’s deep, raspy voice going along with Quavo’s autotune fits well on this track. It’s something that isn’t common on this album.

Migos came out with a bang in early 2017 with “Culture,” but that’s probably not going to be the case this year. The group put in a lousy performance, and they seemed to have rushed it, too. The lengthiness of the album doesn’t make it better, at all; it could have been released as a playlist, or a shorter mixtape. Migos could have done better and should have done better.

Favorite Tracks: Higher We Go (Intro), Emoji a Chain, Too Much Jewelry

Least Favorite Tracks: Crown the Kings, MotorSport, Open It Up,

Discounts and giveaways at CAPSS Suit Up Event

Be the first to comment on "Debut Album Review: Migos- “Culture II”"