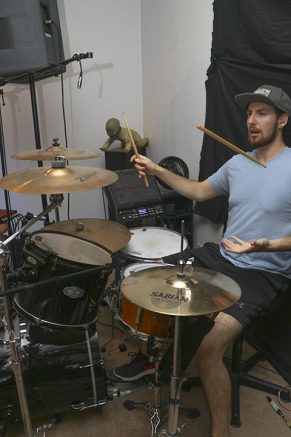 Matt Lomas spinning his drumstick mid-song during a practice session for the band Lucid in Sacramento, California. (Photo by Luis Gael Jimenez)

It was inaccurately reported that Tristan McNay left  due to not being on board with the band’s lyrical content. The actual reason for his departure was due to scheduling conflicts with the rest of the band.

American River College student and business major Matt Lomas has one more thing to add to his list of duties, and that’s being the drummer for local alternative band Lucid.

Murrieta is said to have left due to creative differences, and it’s known that McNay wasn’t on board with the band’s lyrical content.

About a year ago Murrieta parted ways, and while it left them without an additional guitarist and talented musician, they reflected back on the loss with newfound positivity and drive to continue their growth.

“Stevie ended up taking a lot of headroom,” said Towne.

”We do more with less,” said Lomas.

At this point the band has recovered from the loss of Murrieta, but only a month ago their ex-bassist McNay resigned, leaving them to find another new band member.

Although McNay’s departure was on short notice, Simpson said that “we will always continue to evolve.”

Simpson’s words rang true because within this past month they found a new bassist, Connor Lyles, who has been a much-needed addition to the band.

Even with their past and recent hurdles, the band’s first EP “The Debut EP” comes out today available on Apple Music, Spotify and Amazon.

The EP’s cover art was done by Bailey Zindel, and Julian Grenz acted as the coordinator for getting them booked for their next show.

Lucid’s next gig will be at the Boardwalk on Sept. 23 at 6:30 p.m. Presale tickets and general admission cost $12.

Five other bands will be playing, including Altessa, Demon In Me, A Foreign Affair, The Body Rampant and Surviving The Era.

Be the first to comment on "Lucid dreams again"