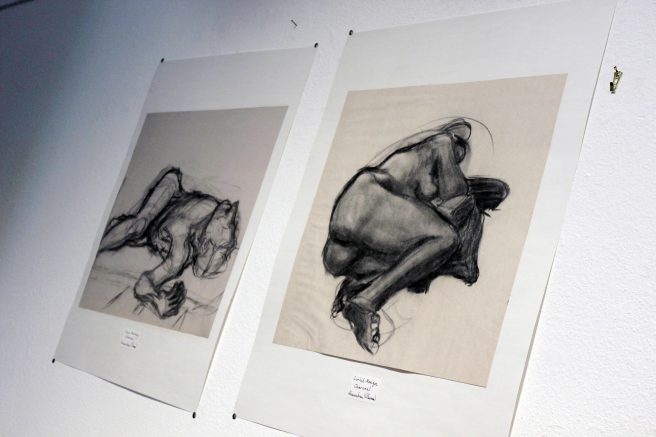 American River College (ARC) students are ready to display their work at the Shadow Box Gallery which is a display intended to showcase students’ art.

Alexandrea Villarreal’s figurative artwork went up today and is based entirely on the human figure in different poses.

Villarreal regularly attends events like drawing workshops and figure marathons in order to further her understanding of the human anatomy and to become a better artist.

“The best way of portraying how a character moves, or even looks,” said Villarreal. “Is to observe the human figure.”

Villarreal is a member of the art club and is majoring in art and art new media with an emphasis on 3D animation.

Travis Cannady, ARC student, is looking forward to his first solo display which will go up in the Shadow Box on Sept. 19.

Cannady draws inspiration from everyday life and other photographers like Ryan Muirhead.

The photographs that will be used in the display were all taken with a Cambo Passportrait camera, a camera that was developed specifically to take passport photos.

This forced him to stand at a distance of exactly four feet from whatever he was shooting  in order for his subjects to be in focus.

Cannady relies strictly on film and described his switch by saying, “there is just  a look that I could not get with digital. There is a rawness to film. It reminds me of old family vacations shot on a disposable camera.”

Cannaday says that he uses photography as a way to cope with depression and that he hopes his photos affect people the way they do him.

Art club president Blanca Bastida urges students to come check out the Shadow Box Gallery located in between the Kaneko Art Gallery and the Oak Cafe.