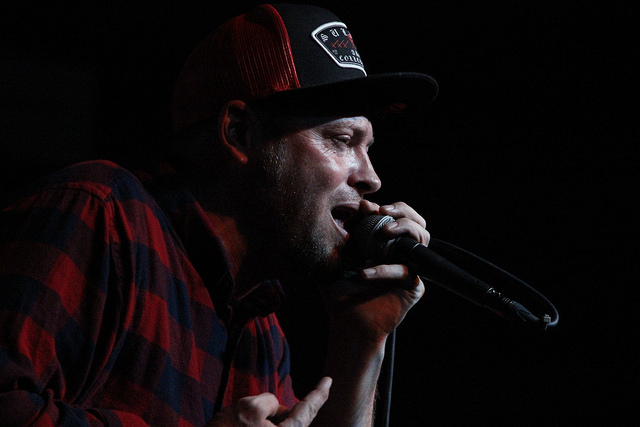 Fortunate Youth lead singer Dan Kelly performed the band's song "Love is the Most High," during a show at Ace of Spades in Sacramento, CA last Thursday. (Photo by Jordan Schauberger)

Fortunate Youth, a reggae band based in Los Angeles, played a show at the Ace of Spades music venue in Sacramento last Thursday and reflected on several experiences throughout their 6-year career, including the intensity they’ve experienced from fans in Sacramento.

“It’s great here. (It’s) a lot of fun and always packed,” said the band’s guitarist and bassist Greg Gelb. “Once everyone gets in here, it’s craziness.”

Lead singer Dan Kelly added that the band relies on the audience to fuel their performance.

“Our set was based on songs that the fans said that they like, so in a sense the fans wrote the set,” Kelly said. “They’re what make this so fun. They’ll be yelling tonight, going crazy and the sound guy can’t even turn them down.”

Corey Draskovich, the band’s keyboard, guitar and bass player, commented on on how much they’ve grown as a family among themselves and with their fans over the years.

“We live in close quarters for half of the year, so it’s impossible to not get really close,” Draskovich said. “We’re brothers and it’s all family. Being on the road creates this really cool network of family with us and everyone else we meet along the way.”

Gelb added that, along with their growth on a personal level, the band’s cohesiveness on stage has also grown exponentially.

“We definitely have (played better together) every time we go on stage, but we don’t notice it right away,” Gelb said. “I think we’re all perfectionist in the sense that we don’t even notice our own progression, so it usually takes someone else to point it out.”

Now at the start of their latest tour, Kelly elaborated on what life on the road is really like.

“It’s as if you’re never stopping, it never ends for as long as the tour goes,” Kelly said. “We say that it’s like a 24-hour day.”

Gelb agreed with Kelly and added that being on the road is an great learning process.

“You learn a lot really quickly, going from one place to the next,” Gelb said. “We’re lucky that we’re able to collaborate with a lot of different artists and learn in that way.”

The show last Thursday marks the fifteenth time the band has played at Ace of Spades.

After the tour is over, the band is planning to get back into the studio to dub some of their tracks.

The first leg of its Set in Stone tour with Stick Figures and Katastro continues through Feb. 6.

Be the first to comment on "L.A.-based reggae band reflects on career at the start of its recent tour"