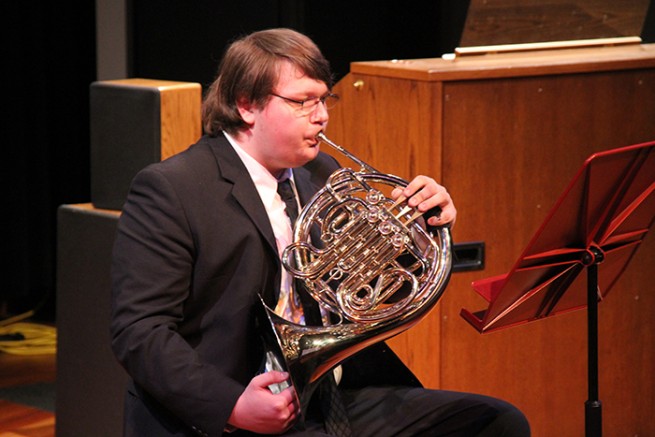 Peter Carter-Grassly plays the french horn in an applied music recital at American River College. The next recital will take place on Thursday. (Photo by Michael Pacheco)

Performers were able to select a piece of music from a list provided by the music department to practice. They were also given the option to perform solo or be accompanied by another musician.

Nick Stefanyshyn played J.L. Small’s “27 Melodious and Rhythmical Exercises” on a tenor saxophone. Stefanyshyn was the only performer of the seven that did not have a musician to accompany him on stage.

“These past couple of weeks have been more of polishing off the piece rather than just hard ‘what is this piece supposed to sound like?’,” Reynolds said.

Efren Fuentes performed the first movement of Bach’s “Sonata No. 4 in E Minor, BWV 1034” on flute, accompanied by professor Susan Hamre on piano, who also plays piano for the rest of the performers.

Andrew Preston also sang an excerpt from Don Giovanni, titled “Dalla Sua Pace,” and was followed by Henry Purcell’s “If Music be the Food of Love.”

“I had one moment when I forgot the words which hasn’t happened in rehearsal, but I recovered relatively well,” Preston said.

Casey Reynolds was the last act of the concert, which she performed Fernando David’s “Concertino for Trombone Op. 4” on euphonium.

Hamre, who directed the concert, described the difficulties students have while performing in front of their peers.

“Performing in front of your peers is as nerve-wracking as it gets,” Hamre said.

Be the first to comment on "Student musicians play for peers"