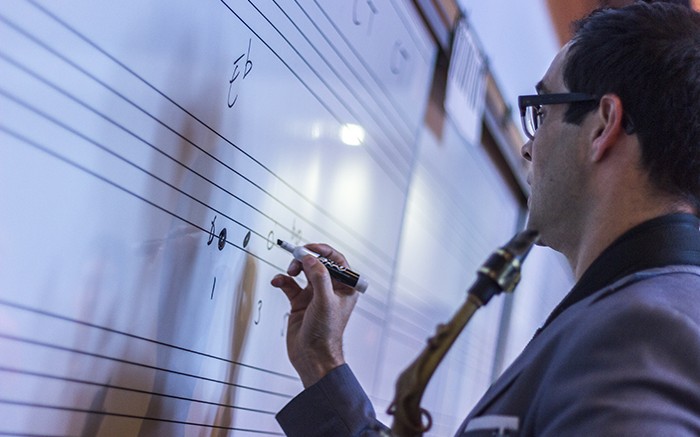 Musician Jacam Manricks, who is a University of California at Davis professor speaks at a jazz clinic event to discuss how students can succeed in the music industry at American River College on Oct. 22. Manricks will be performing with ARC music department professor Joe Gillman at UC Davis in a jazz concert on Oct. 30 at 7p.m. (Photo by Karen Reay)

A well-known jazz musician and professor at the University of California at Davis visited American River College on Thursday to discuss how students could succeed in the music industry in his lecture during a jazz clinic.

Jacam Manricks said that being a successful musician is more than just playing music. Manricks urged the students to not only think about the artistic side of music, but the business aspects of the industry as well.

“When we listen to music, we want to be moved,” Manricks said. “So, put people in the right positions to make the best music possible.”

Manricks worked with the students on chord tones and passing tones, which are essential to learning music and it’s commonly known in the music world that not understanding these concepts can lead to a dead end.

Manricks told the students that it is key for new musicians to represent themselves professionally and respectfully for the business end of the industry, leaving the “cool” musician persona at the door.

Manricks covered music theory based on where the students’ skill sets were.

Noah Flores, a music major at ARC, played with Manricks and said that it was “dope” to play with a professional.

“The stuff he gave us today are concepts we can practice for a whole year,” Flores said.

ARC music professor Joe Gilman said that it was a good opportunity for students to get to perform with Manricks.

“They get to be around and play with a professional musician who’s been at it for a long time,” ARC music professor Joe Gilman said. “There’s no better way to learn than that.”

After spending some time working in musical theater in Sydney, Manricks made his way to New York where he went to school. He received his masters degree at William Paterson University and his doctorate at the Manhattan School of Music.

Manricks is currently playing gigs in New York promote the release of his newest album.

For Manricks, the passing and chord tones he talked about open up doors to a magnitude of possibilities in music.

“It’s one of the things I love (about music): it’s never ending,”  Manricks said.

Manricks ended the workshop with a parting word of advice.

“Prepare, be on time, be professional, be smart, prioritize,” said Manricks.

Manricks grew up with musician parents in Brisbane, Australia, so he had many opportunities to be exposed to the music world as a child.

“Playing around so many other musicians, growing up, was the best way for me to learn,” said Manricks on his early years learning music. “I learnt in a culture of creativity.”

Gilman will be playing with Manricks at a gig Friday at 7 p.m. at the Mondavi Center at UC Davis.

Students resurrect the smash on campus

ARC planted the seed for City of Trees Brass Band