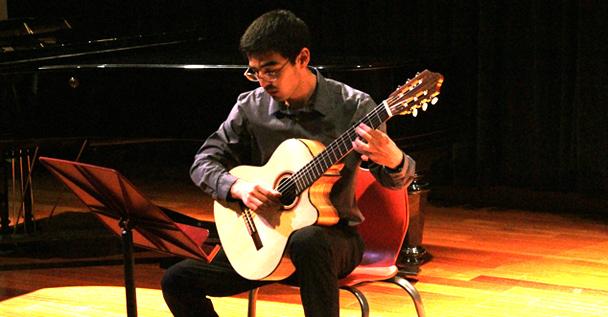 A saxophone, vocalists, flute and guitar playing were all featured on Friday as American River College held a music recital for students and faculty to attend.

The opening act of the music recital was by ARC student Nicholas Stefanyshyn, who played Ludwig van Beethoven’s “Trio for Oboes,” and “English Horn Op. 87,” on his tenor saxophone.

Wei-shan Sun and her flute took the stage next. She played Bela Bartok’s “Suite Paysanne Hongroise.”

Sun said one of the things she can take away from her last recital was confidence.

Both Sun and Kuvakos said that the flute and guitar were their first choice of instruments and have been playing them ever since.

Sun has played the flute for 12 years now and hopes to transfer to California State University next semester where she intends to continue her study in the musical arts.

“My tone needs to be more rounded and confident,” said Sun.

Eric Kuvakos, on guitar, played two songs, one by an anonymous artist, “Se lo M’accorgo,” and Thelonius Monk’s “Round Midnight.”

Kuvakos revealed that his lack of other extracurricular activities like sports led him to play the guitar for the past eight years.

Kuvakos said “just being here at school everyday,” helped him on his guitar playing in preparation of the recital.

Recitals will be held all this week in the Fine and Applied Arts music recital hall, room 547, and will continue through May 4. Admission and parking are free.

In Our Heads- Jorden Hales