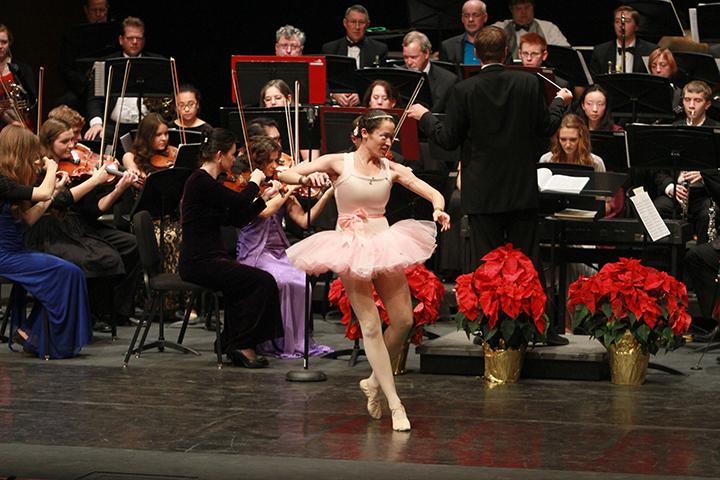 Spiritdancer Donaldson performs the Dance of the Sugar Plum Fairy, accompanied by the ARC Orchestra at the Family Holiday Concert yesterday. Photo by Brooke Purves

The American River College Orchestra is an eclectic mix of music majors, students who just like to play their instruments and community member volunteers. Last night they put on a warm and festive performance at the Family Holiday Concert in the theater. The orchestra played to a full house, performing selections from “The Nutcracker” along with various waltzes and holiday tunes.

The program featured selections performed by the Four Seasons String Quartet, but the highlight of the first half was the dances from “The Nutcracker.”

Steve Thompson, music director, said that they had decided to do selections from “The Nutcracker” some time ago, “and somebody had the bright idea to have dancers perform with us.” The company had a short time to prepare.

Elizabeth Ruffino, second year nursing student and Melany Filomeo, first year paramedics major, both play the viola and take orchestra as an elective. “This was the first time playing the whole “Nutcracker” suite, so it was really cool with all the dancers,” said Filomeo. “We had a hard time not staring at them during the rehearsal.”

Kevin Haken and Nolan Lewis performed in their characteristically robotic manner in “March of the Toy Soldiers,” followed by Spiritdancer Donaldson, adorned with wing-like white eyelashes, in “Dance of the Sugar Plum Fairy.” Caitlin Vanderveen was energetic and springy in “Russian Dance,” and Heather Halk was a beautifully voluptuous a belly dancer, enticing in shades of purple and gold in “Arabian Dance.”

“Chinese Dance” performers elicited chuckles from the audience with their quaint storytelling and the centerpiece of “Marzipan Dance” looked like the quintessential toe shoe ballerina in her flouncy white tutu.

“March of the Flowers” was colorful and interesting, if not a bit thrown together. It may be that the dancers hadn’t practiced it enough together, but only a critical eye would be bothered by the missteps.

After intermission, Thompson explained a bit about the “New Year from Vienna” selections to be performed the second half of the evening, a concert, performed by the Vienna Philharmonic every New Years morning broadcast across the world to millions.

Several waltzes by Johann Strauss Jr. delighted the audience, but the most engaging selections were saved for last.

Soprano Natasha Scott beautifully executed Giacomo Puccini’s “Musetta’s Waltz” from “La Boheme,” and the orchestra then reminded us about the transfer of time from one year to the next with vocal tick tocks during the Tick Tock Polka, also by Strauss Jr.

Before the start of the second half, Thompson explained that when the Vienna Philharmonic plays the first trilling violin notes of “The Beautiful Blue Danube” by Strauss Jr., the audience immediately recognizes the unofficial national anthem and begins to clap, forcing the orchestra to stop, acknowledge the audience and wait for quiet to begin again. Thompson then instructed the concertgoers to do the same. They obeyed, immediately acknowledging the most familiar and rhythmically pleasant tune of the night.

The audience joined in clapping during the vibrant finale; “Radetzky March” by Johann Strauss Sr. and Thompson encouraged the participation.

The evening ended with a standing ovation.

The Orchestra will perform the concert again on Dec. 11 at the Gibbons Park Community Center at 7 p.m. 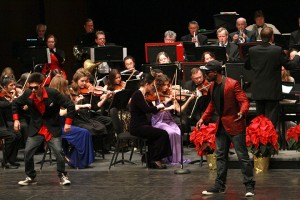 Nolan Lewis (l) and Kevin Haken perform in “March of the Toy Soldiers” during the Family Holiday Concert yesterday in the ARC Theatre.

Be the first to comment on "ARC’s Family Holiday Concert opens to full house."