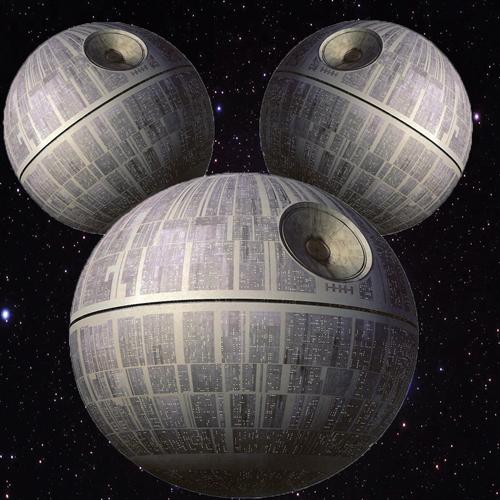 Not too long ago, in or very own galaxy, a $4 billion dollar deal is causing discord among fans. (Photo illustration by Daniel Romandia)

CON
When Disney purchased Lucasfilm for $4 billion, the news hit me like a rushing Rancor. I shouldn’t have been surprised. After all, George Lucas has had a presence within Disney for many years now. Just ask anyone who has ridden the “Indiana Jones” ride or attended the Jedi Training Academy at one of the Disney Parks. But does Disney really have to own everything?
The thought of the conglomeration known as Disney owning more rights to the movies I love makes those movies feel just a little more corporate. Not that Lucasfilm was tiny, but at least it felt local-ish. I don’t really see Disney doing much in Lucas’s hometown of Modesto, Calif. As if there wasn’t little enough to do there, now they can’t have the occasional “Star Wars” hoopla either.
Disney CEO Robert Iger flexed the might of the company by purchasing Pixar in 2006 and Marvel in 2009. These monumental media moments, while having produced some decent films, have reduced the number of different voices that tell the fans the stories we want to hear.
My dad auditioned for the part of Luke Skywalker in the late 1970s, so the Lucas obsession was built into my DNA. It was a tiny 3-year-old me that held my fathers hand to watch Indy wade through a secret passage filled with bugs and sit down to a dessert of chilled monkey brains in “The Temple of Doom.”  As an adult, I have continued to keep the Lucas films a family staple (my daughter is still trying to convince me to get a dog to name Indy).
And yes, I’ve heard the arguments from my fellow geeks saying, “Disney did make the Avengers” as if this would make up for decades of butchering story lines and countless beloved characters. I had issue enough with Lucas going back to play in a galaxy far, far away, but to have Disney executives ruining the Old Republic tells me the evil empire may have finally won. If you thought Jar-Jar Binks was horrid before, I hate to think what Disney will do with him.
Sure, Disney has the big bucks to put big budgets behind the classic sagas that Lucas brought to life, but if you think the mega-corporation has the heart to reach out to the fans like Lucas always did, you may be in for a rude awakening.
The big-bang-like growth of the “Star Wars” expanded universe could now feel the effects of the Disney gravitational field and experience its own version of the “Big Shrink” theory. After all, Disney is not known to be generous in letting others tell a story they own.
If only Obi-Wan could have stepped in to tell Disney, “These aren’t the droids you’re looking for… Move along.”

PRO
We can talk about corporate-based entertainment monopolies all day, but when we get down to it, Disney isn’t the first and they won’t be the last. So let’s focus on the matter at hand: is Star Wars in good hands with Disney? The simple answer is yes.
No matter what your feelings on the prequel trilogy are, it’s undeniable that the most recent set of films were not of the same caliber as the original trilogy. Even if midi-chlorians or a Darth Vader that looks like the unofficial sixth member of ‘N Sync don’t fill you with dread, it’s unquestionable how absolutely horrendous Jar-Jar Binks was and still is. Would Disney have created such an abysmal character? Despite their family film history, I say nay.
Let’s take a trip through Disney’s track record with more grown-up films. Maybe my memory is a little fuzzy, but I don’t recall anything even slightly resembling the wayward Gungan in the “Pirates of the Caribbean” franchise. Sure, it has Pintel and Ragetti, the comically terrible pirates sporting three eyes between the two of them, but they simply serve to add a bit of slapstick to the film.
And let’s not forget Disney’s most recent acquisition: Marvel Comics. Did you see “The Avengers”? It was fantastic and also grossed $1.4 billion dollars worldwide. Really, most of the Marvel movies that have come out since Disney’s December 2009 purchase of the comic book company have been solid, with very few exceptions (looking at you, “Thor”).
The potential for the next “Star Wars” film to be great is up in the air, but the matter of whether or not it’ll be better than the prequel trilogy is nearly unquestionable. With lackluster writing that includes fantastically awful lines like Padme’s romantic plea to Anakin – ”Hold me, like you did by the lake on Naboo; so long ago when there was nothing but our love. No politics, no plotting, no war,” – I have a feeling that Disney can improve on the sci-fi series with no issues.
If Disney can treat “Star Wars” the same way they’ve treated Marvel by staying out of the way and letting people who understand the franchise do their work, this combo could be wonderful. With Disney’s influence in the film industry and the sheer amount of money they could throw at anything “Star Wars,” the potential for the next films to finally resemble the original trilogy is there. Regardless of whether or not Disney can make that happen, there’s no way the new trilogy can be worse than the prequels in terms of butchering our collective nostalgia. So let us rejoice, because we are on the cusp of a brighter, “Star Wars” filled tomorrow.

When the Walt Disney Company purchased Marvel Entertainment in 2009, the fan outcry was almost as big as the $4 billion deal.  Fans raised questions such as, “will Wolverine be walking around Disneyland now?”  Since then, only a few things have noticeably changed, such as Marvel superhero cartoons airing on the Disney networks.  Then came the next big announcement: Disney announced they are purchasing Lucasfilm Ltd. This announcement would send the geek world into frenzy, only three years after the Marvel deal. Memes and Photoshop mash-ups invaded the Internet immediately.  Pictures of Princess Leia Disney-fied while surrounded by Cinderella and Snow White, included as a “Disney princess,” or Woody from “Toy Story” wearing the iconic “Indiana Jones” fedora, just to name a few. It seemed fans were either vehemently against the move or they embraced it.  Either way, the coming years of the Disney/Lucasfilm relationship will prove to be very interesting.
SHARE
TWEET
PIN
SHARE

Professor by day, D.J. by night

Be the first to comment on "Head to Head: Disney Purchase of LucasFilms"