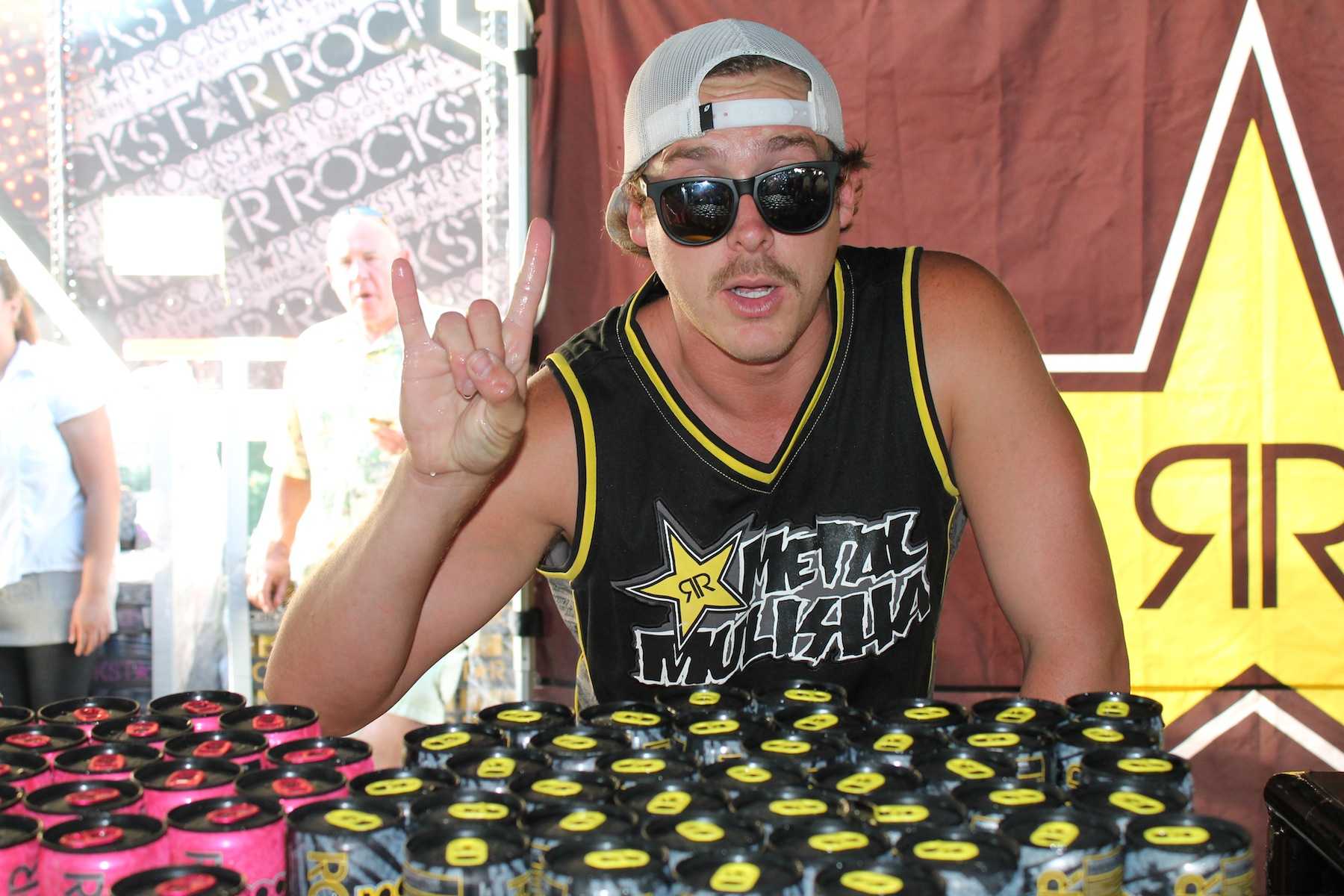 There couldn’t be a more properly named multi-band nine-hour-long concert tour than “The Rockstar Energy Drink UPROAR Festival” which invaded Wheatland’s Sleep Train Amphitheatre on Oct. 13, 2011, bringing with it the caffeine-induced fury of a rock and heavy metal cocktail.

Ten thousand ear plug-defying enthusiasts and I experienced a couple rock star-caliber performances, many niche (my nice way of saying “who the hell are these guys?”) bands and a trio of mainstream-rock radio favorites that included Seether, Three Days Grace and the headliners Avenged Sevenfold.

The festival featured three different stages, all of which were co-opted by corporate sponsors including lighter manufacturer Zippo and Lifestyle Condoms. For me, the day was ultimately a test of endurance. Could I listen to unimpressive music from bands like Black Tide and Hell or High Water for countless hours before I even heard a song that was familiar to me? Not a chance! My saving grace ended up being the Rockstars themselves and no, I’m not referring to any particular musician – I’m referring to the centrally-placed booth that was giving away unlimited cans of the energy drink Rockstar throughout the afternoon. For a mega-concert the size of “UPROAR,” I was lucky enough to have fellow “Current” staff writer and columnist Phillip Friends accompany me in order to provide you with his take on some of the acts that took the side stages throughout the afternoon.

A stand-out performance came between sets on the second stage when a two-piece trash metal band, The Athiarchists, would open the side of their small tour bus and begin smashing symbols and spewing their aggressive lyrics for anyone who wanted to hear it. Their style, though sometimes incoherent and jumbled, was filled with the type of rhetoric that you would expect from two middle-aged overweight men with enough angst to fill a middle school cafeteria.

Phillip’s final verdict: Loved it? Loathed it? Missed the Mark? – Loved it!

The main event for the second stage was Sevendust. There weren’t any particular songs in their set that stood out, but it was a great band to kick off the night and prepare everyone for the real show on the main stage. Their energy and attitude was classic Sevendust in the sense that they pulled the audience together, got them into the performance, and really put their all into the show for a band that have seen better times.

Standout song: Not a single song.

Phillip’s final verdict: Loved it? Loathed it? Missed the Mark? – Loathed it!

Bullet For My Valentine opened after a brief and seemingly undesirable “Miss Uproar 2011” contest that most of the fans jeered all the way through. Lead singer and rhythm guitarist Matt Tuck thanked the fans for coming out and encouraged them to sing along to the set list if they knew the words, mosh in the small pit, and overall just have a good time at the Uproar Festival. The screaming style of Bullet was undesirable by many of the audience members. A small following in the front was quite energetic, but that may have been slightly misleading, as these people were probably amped on Rockstar energy drinks. Not being a huge fan of the throaty style disconnected me from their set. On pure energy from the band, however, there wasn’t a single band from the second stage that could’ve replaced them.

Bullet for my Valentine

By the time the sun was setting and Seether took the main stage, I was practically incapacitated from the amount of caffeine I had consumed over the last six hours. Wired and extremely alert, I watched as Seether’s vocalist and lead guitarist, Shaun Morgan, utilized his Scott Stapp-ish voice to burn through a 35-minute set of songs about pain and brokenness. The band’s most popular track “Tonight” fell flat as Morgan’s gruff voice felt less than reassuring. Perhaps even less reassuring was the gentleman sitting in front on me who had a beer raised in each hand as he sang along to lyrics that included the pre-chorus query “Why try to stay sober?” When Seether launched into an acoustic version of “Broken,” lighters (err… iPhones) made their first appearance. It wouldn’t be the last time they appeared that night! Their set’s closer “Fake It” was well received by the audience. What’s that oft-heard saying “Fake it until you–?” Oh yeah, “Make it” – or at least become the latest Staind rip-off.

The next band to perform was Three Days Grace, and they did so in a manner that caused me excruciating “Pain.” The band opened with “Pain Play,” and it ended up being one of the evening’s anthems. The audiences’ masochistic desire to hear more of their awful music made me cringe. Adam Gauntier, songwriter, guitarist, and lead vocalist, is 3 Doors Down bland when it comes to his stage performance. He screams “Three Days Grace f***ing loves Sacramento” and people cheer. What else is there to say? Oh yeah – while they played their super-hit “I Hate Everything About You,” a stomach-full of energy drinks was almost projectile vomited onto the now-intoxicated man in front of me. “I Hate Everything About You’s” success in sales baffled me, but hearing it live made me question the sanity of everyone in the audience (myself included). Gauntier declared, “Sacramento I need you to join me,” prior to launching into the single “Never Too Late.” Sacramentans – you collectively have a better voice than Gauntier, from whom I needed three days of peace to right my mind. Fists were pumping in unison during the band’s set-closer “Animal I Have Become.” “We love you! Thank you Sacramento!” bellowed Gauntier as the band exited the stage and I shook my head (that’s my non-verbal way of saying, “You’re not welcome!”) while I wrote into my notebook.

Standout songs: Not a single song.

At 10 p.m., the Amphitheatre’s lights went dark and a wave of screams and raised fists sporting the “metal sign” crashed onto the main stage. What followed was one of the most fascinating openings I’ve witnessed at a rock festival. Orange County’s Avenged Sevenfold spent two minutes using flames and lasers to entice the crowd to eat them up. They would eventually get their fill. The slow procession into opener “Nightmare” allowed for the current to drop and a stage dominated by a skull with bat wings to appear. Avenged Sevenfold or A7X are a self-described “metal core” band that sounded like a guitar riff-heavy metal band with a phenomenal sense of melody. Unfortunately, I could raise my hand like most of the audience when vocalist M. Shadows asked whether it was their second or third show. When all hands didn’t go up, Shadows asked “Where the f*** the rest of you been? At a Simple Plan concert?” The winged skull shot out flames throughout the night’s performance, including during fan-favorites “Beast and the Harlot” and “Afterlife.”  A7X dedicated the song “So Far Away” to their former drummer, James “The Rev” Sullivan, who died back in 2009. Synyster Gates, lead guitarist, asked concert-goers to hold up their lighters or cell phones so that The Rev could see them from above. Extremely cheesy? For some reason it oddly was not (as it would be at a Simple Plan concert). Shadows is a naturally gifted performance artist in addition to being a great vocalist. Explaining the lyrics to one song, Shadows states that he wrote about “a man who asked a woman to get married and was told no, provoking the man to rape her and stab her 55 times.” The audience screamed their lungs out in response, causing Shadows to exclaim that, “You guys are sick! I’m glad to be a Californian!” As the hour-long set approached the end, they closed with “Bat Country” – the mega-hit that put them on the Billboard charts and also on the MTV radar. The song begins with Shadows growling that “He who makes a beast out of himself gets rid of the pain of being a man,” after which the band joined him in executing the festival’s best song of the entire day. A7X’s performance was also the festival’s best. Their headlining slot was well deserved. The adrenaline of the crowd must have mixed a lot better with all those energy drinks – I wish it were the same with me. I am a “sick Californian,” however a little pain was the price I had to pay to enjoy the “metal core” band from Orange County.

Standout songs: “Afterlife,” “Bat Country” and “Welcome To The Family.”

Combined, the “UPROAR Festival” was an exercise that tried to mix music with merchandise. It was a blatant knock-off of “OZZFEST” – the granddaddy of heavy metal festivals. The bands brought far more testosterone than they did memorable live performances.

For a large part of the audience– that was perfectly fine.

For the rest – the festival’s main sponsor adequately filled that void.

American River students were you there? We want to hear from you! E-mail us with comments, memorable moments and photos at [email protected]. As always keep us check and make sure our assessments are right on the “Mark.”