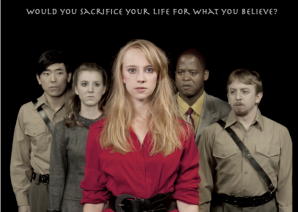 Antigone is a play that hits every emotion. The production full of love, hate and war, encompassed with deep, expressive words, fueled the audience with emotions of sadness and laughter. “The dialogue was dynamic,” said Marissa Gonzales, ARC English major.

Antigone, the name of the leading female character, gives the perception that the play is all about her. In a sense it is, but there is another story. A story of a king in time of war, who sets rules in place only to have his beloved niece break them. “I’m not going to let politics be the reason for your death,” said Creon, the king.

Creon attempts to spare her life, but Antigone insists on dying to avenge her brother’s death. “You are the king, and all powerful, but that you cannot do,” said Antigone.

Opening Friday, Nov. 18, American River College’s rendition of Antigone gave the audience a run for their money. Entering the round theater, the audience is welcomed by a Celtic sound of music. “It was really mind-blowing, I really wasn’t expecting a full dimension view,” said Amanda Leschke, an art major at ARC.

The stage, with gray, black and white speckled tile, holds just a single chair. As the side curtain is drawn, the lights dim to darkness and the play begins.

In the night, you hear footsteps filling the room. When the light is released you see visions of the key players frozen in place, as the live narrators start to move and begin to set the scene for the audience.

“(The play) focused on the interaction between the characters by less use of set, and by more use of color, character and by use of clothing,” said Gonzales. “The atmosphere, the lighting, the subtle use of the music, it was amazing.”

With a flash the scene comes to life. Lauren Hirsch did an extraordinary job becoming a believable character as Antigone, struggling with living for her love of her fiancé and dying to prove a point toward her brother’s death. Overall, the play was very captivating and delivered a spectacular performance.

“It really wasn’t what I expected. It made me like (the story) even more,” Leschke said.

“At the very end you could not stop listening. They did a fantastic job with this play,” said Gonzales. “It was their first night; I can only imagine how much it’s going to explode by the end.”