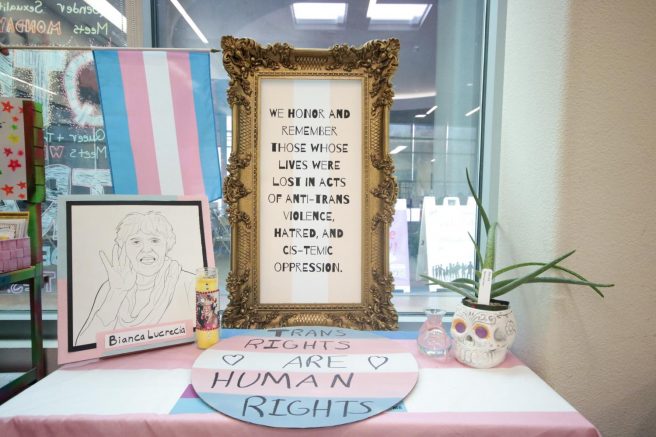 An altar, photographed on Nov. 19, 2019 was created by members of the American River College Pride Center, to honor members of the transgender community who have lost their lives due to gender-based violence and suicide. The altar was created for Trans Day of Remembrance which takes place annually on Nov. 20. (Photo by Emily Mello)

The air was thick with humidity, the sound of breaking glass and the screams of rioters with lipstick stained lips echoing “Pigs!” through the streets of New York City. In the early hours of June 28, 1969, eight undercover police officers entered the Stonewall Inn. Their mission was simple; identify and arrest anyone not conforming to legally mandated gender stereotypes.

At this time, people wearing clothing that didn’t match their assigned gender was illegal in many states, including New York. Many of these laws have only changed as of recently such as Oakland repealing them in 2010, according to the Public Broadcasting System or PBS’s “Arresting Dress Timeline: Anti-Crossdressing Laws”.

Stonewall was known as a beacon of queer culture in New York City and it welcomed drag queens, as well as trans and gender non-conforming individuals.

The police had scoped out the inn for weeks prior to their invasion and they came prepared to fight. More police officers and police vans, or “paddy wagons,” arrived at the scene and began handcuffing and leading the employees out of the inn.

The light glimmered off their badges as a seemingly stargazing crowd watched as they beat and arrested the patrons of Stonewall. The crowd quickly erupted, throwing anything they had and slashing the tires of police cars.

Marsha P. Johnson, a transgender woman of color and gay rights activist, was arrested that night and credited with “throwing the first bottle” in the fight against the New York City law enforcement. The night arguably changed history forever and launched the gay rights movement in America.

No one died in the Stonewall Uprising, however that is not the case for many other trans and non-binary individuals, in years since many have been harassed, assaulted or worse. On Nov. 28, 1998, Rita Hester, a transgender woman of color, was brutally stabbed to death in the street in Alabama.

Her memory won’t likely be forgotten thanks to her friend, Gwendolyn Ann Smith, a transgender woman and trans rights activist who in 1999 founded Trans Day of Rememberence in honor of all who have lost their lives due to gender based violence or suicide.

Trans Day of Remembrance takes place annually on Nov. 20. To many allies and members of the LGBTQ+ community at American River College and beyond, this day holds a deeply personal and sentimental value.

The Pride Center and Transcendence Club will honor Trans Day of Remembrance by holding an event featuring an altar, poem and song submissions, as well as guest speaker Yozantli Lagunas Guerrero.

Guerrero is a self identified “trans, non-binary, queer, Mexican-American,” and a recent history and political science graduate from California State University, Sacramento. They will be giving an interactive lecture highlighting trans history in Community Rooms Three and Four, from 12 to 2 p.m.

The altar will be decorated with student and faculty submissions. Spoken word poetry and songs will be performed and the event will also allow anyone who would like to pay their respects to come up and speak.

Isidore “Izzy” Manes and Isaac Kelly, president and vice president respectively of ARC’s Transcendence Club, shared their personal experiences as trans people and why this day is so important to them.

“Trans Day of Remembrance is a day to remember all of the lives that have been lost to bigotry and hate and all the struggles trans people go through to even just be themselves,” Kelly said.

Kelly identifies as a trans man and has been involved in Transcendence for the past year. Transcendence is a club for anyone outside of the traditional gender binary or that identifies as transgender. Manes and Kelly say the club strives to be a safe space for the trans and non-binary community on campus.

In collaboration with the Pride Center, Transcendence is a resource for anyone questioning their identity as well. Both organizations spend a great deal of time raising money and awareness for LGBTQ+ students on campus.

“This campus has definitely come a long a long way but with anything there is room for improvement,” Kelly said.

Kelly says he thinks it is important for cisgender people, or people who identify with the gender they were assigned at birth, to understand the struggles that trans people face on a day to day basis.

“There’s days that I wake up and I like the way I look. I think I look close to my most authentic self and then there are other days where I spent two hours trying to pick an outfit that I don’t feel like I look like a girl in,” Kelly said.

Kelly and Manes both said their biggest hope for their club and the Trans Day of Remembrance event is to raise awareness about the trans community on campus and off.

”I think it’s important that we are all coming together to observe this day because I dont think people understand or take seriously what affects transphobia and the cruel treatment that transgender people really face and what that leads to; it leads to transgender people getting killed,” Manes said.

Manes, who identifies as both non-binary and transgender, says that they feel that even though some positive changes have happened within society and on our campus, there is much more work to be done.

Manes says that the political climate we live in now has made almost everything controversial. They say they believe that when any minority group asks for help or fair treatment they are challenged and deemed as “special snowflakes” by some who disagree with their ideas or even their existence.

“We are trying to help people understand who we are and what we go through so maybe they will stop killing us or maybe someone will stand up when somebody is treated cruelly,” Manes said.

Manes says they believe that trans people are marginalized and often forgotten about during social and political conversations and this can be harmful.

“The further a trans person ends up being divided from school, work, family, the further they get divided from society the more likely they are to face that type of violence where they could be hurt, beaten or killed,” Manes said, “Many of them also end up committing suicide due to the pressures and we recognize the people who have committed sucide as well.”

ARC has honored Trans Day of Remembrance for the past three years. At last year’s event, Manes read a spoken word poem about how easy it would be to allow trans people and others to use their preferred name on school websites, documents and ID cards.

Since then, Los Rios has made changes to its policy. Now, anyone regardless of their legal name status can feel comfortable and supported while attending school.

“This change was a result of many conversations over the past several years with students, faculty and staff who had a strong interest – an interest shared by the college and district – to allow for members of our community to personalize their identification wherever possible,” said Scott Crow, ARC’s communications and public information officer.

Crow added that this change was not just for the LGBTQ+ community but also for people such as himself that do not go by their first name.

“ARC and all of Los Rios are committed to building a culture of inclusivity and equity, and this item has been of particular interest in the LGBTQIA+ community,” Crow said.

Manes said this was a major change for the trans community on campus that raised awareness about the other LGBTQ+ resources on campus as well. They added that they feel this change was the biggest win for trans students in the Los Rios District.

“We made ourselves not invisible anymore,” Manes said.

Manes says transgender and gender non-conforming students have enough to worry about without the added stress of not being recognized as themselves.

“We have to fight our own bodies and society to shape ourselves, literally and figuratively, into the forms that we feel best suit our identity,” Manes said, “Other [cis] people don’t have to deal with this ongoing existential crisis of just fighting to have any identity to speak of, just fighting to not be invisible.”

Manes says they do not feel that they need to meet any gender expectations, even that of their gender identity. They added that although they feel more feminine,  they dress in a variety of different styles to express their combined masculinity and femininity.

“I try to challenge the ways that they can both be combined, a lot of people don’t recognize what that kind of expression is,” Manes said.

Manes said that because of this, many people often do not understand or do not know what pronoun to call them.

“The vast majority of people will assign me a pronoun no matter whether they are sure or not and that is why I am very adamant about being called they/them,” Manes added, “No matter how I am dressed no matter how I am feeling or acting them/them is neutral enough to be appropriate.”

Manes suggests that anyone who is confused or curious about trans and non-binary people should educate themselves.

“If you ever have any doubt in your mind about what pronouns or name someone might like to use, just ask, but don’t call us out in public,” Manes said.

Manes and Kelly both say they believe that education and understanding about trans people and their daily lives could potentially help reduce the bigotry and violence that many trans people face.

This type of information did not exist in the same ways two decades ago when Rita Hester was brutally murdered. Trans Day of Remembrance will live on in her honor and serve as hope for people like Manes and Kelly.

Although we have come a long way, violence against LGBTQ+ individuals continues and has been seen recently in the form of mass shootings such as in Orlando, Florida at Pulse nightclub that killed 49 people and injured 53 others.

Manes and Kelly say that they believe that until more people come to an understanding about queer and trans people, atrocities such as this one will continue happening.

As Smith said at that long-ago first Trans Day of Remembrance vigil in 1999, according to media outlets that originally reported on the event, the journey is ongoing.

“With so many seeking to erase transgender people — sometimes in the most brutal ways possible, it is vitally important that those we lose are remembered, and that we continue to fight for justice,” she said.