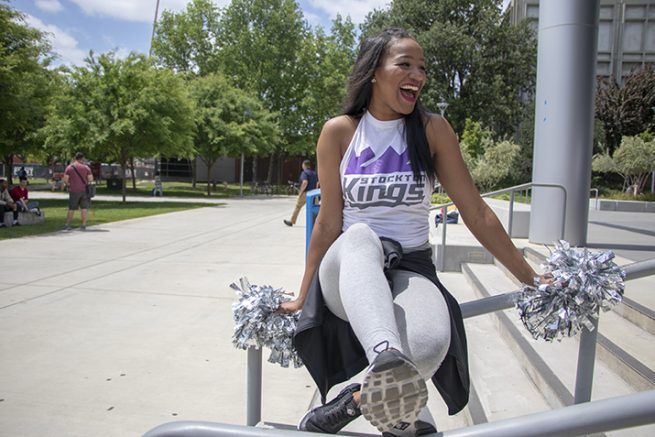 After days of auditioning, Ariana Ogans steps on the glossy hardwood floor of the Sleep Train Arena sporting a bright yellow bikini with rhinestones that her mother added for her. The outfit is completed with a pinned, white circular paper that reads “number 126.”

There, she approached a row of 60 girls who line up in front of a panel of judges with 35 purple bouquets. Ogans heart begins to pound as she hears the judge begin to call numbers and hand out flowers. With the bouquets dwindling, Ogans looks at the ground to calm her nerves when she hears her number echo throughout the arena.

“I cried, I was just super excited to be a part of a dance team,” Ogans said.

Now, as she attends American River College as a dance major, Ogans balances her dreams of becoming a professional dancer with her studies.

Growing up in the Rocklin area, Ogans started gymnastics at age 5 but at 6 she was diagnosed with Type 1 diabetes. She didn’t let her health keep her from participating in gymnastics, however, but her passion for dancing didn’t come until she attended her elementary school’s talent shows. There, she and her younger brother choreographed dances to some of their favorite Christian hip-hop artists, like Trip Lee and Lupe Fiasco.

Her passion for dancing followed her to Rocklin High School where she took an entry-level dance class during her freshman year and immediately was bumped up to the third-level dance classes, where she stayed until her senior year.

One thing she wanted more than anything was to be a part of her high school dance team, but when she tried out every year she was told the same thing each time.

“I was told [by the coach] I didn’t blend in and I didn’t have the identity that they were looking for,” Ogans said. “They never had a colored girl on their team.”

By her junior year, the coach told the young dancer not to bother auditioning, but her determination didn’t allow her to quit. During her senior year, she was able to take the dance team class, which was the most advanced class, but she was never allowed to be a part of the team.

“It made me upset because it took something away from me, and I didn’t have that experience in being a part of a dance team,” Organs said.

After graduating in 2017, she enrolled at ARC as a dance major and tried out for the Golden State Warriors dance team, the Warrior Girls, since she missed the Sacramento Kings Dancers auditions. Coming straight out of high school, Ogans says she wasn’t prepared for being surrounded by women who wore rhinestones on bright outfits, while she wore gym shorts and a sports bra.

Then, last June, Ogans heard that the Sacramento Kings Dancers auditions were going to be different. The team was adding a dance team to its minor league team, which meant there were more openings. More than 200 girls tried out during the two-day audition, which included on the spot technique, jazz and hip-hop dance routines, interviews, and a solo dance routine.

“When you get hired for a job you’re like ‘Oh yes, I am going to get money’, but to be able to say I got the dream I wanted and I get paid was like a lot to take in,” Ogans said.

Being a part of the Stockton dance team means Ogans is an ambassador. Dancers make appearances at events and stay current on the world of basketball. According to Ogans, the Stockton Kings value education and their community; therefore, the dancers read to elementary school children and attend community events in the Stockton area.

Ogans reflects on how being a part of a dance team gives her a sense of belonging.

“They are my sisters … we all have the same dreams and they are always going to be cheering me on,” Ogans said. “I never had a good support system of friends in high school and they are the sweetest people ever.”

When not performing on the court, Ogans twirls back into her role of an ARC Honors Dance company student dancer, where she works on strengthening not only her skills as a dancer but others too.

“I got to have a leadership role and choreograph dances [in the dance company],” Ogans said. “The company has helped me grow and be more confident as a dancer.”

During the regular game season, Ogans says she struggled with scheduling between dancing with the team and her dance classes. ARC Dance Professor Sunny Smith sees Ogans’ potential but worries about her juggling her dream and school.

“She going to have to learn not to overbook herself, but I know how hard it is …” Smith said. “But I love her dancing, choreography and I like her as a person.”

Ogans will participate in the Sacramento Kings dance auditions this late June and hopes to make it on the main team, no matter how many times she has to audition.

“You have to be dedicated and know your goal for yourself and focus in on it  like you can do it,” Ogans said.

Sanders rallies invoke an age past