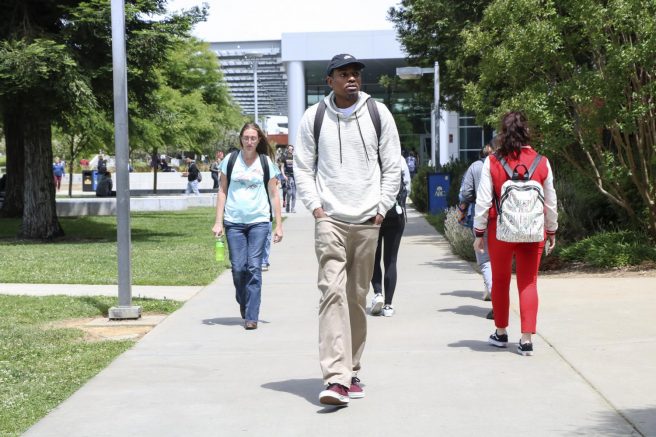 Staff writer Anthony Barnes returns to American River College after a six year break filled with many hardships which led him back on track to obtain a college degree. (Photo illustration by Ashley Hayes-Stone)

I blew it. I’ve been out of school for too long. I should have just gone to a community college straight out of high school.

All of these thoughts ran through my mind when I was struggling with the decision to return to school.

If I had to guess, there are a handful of students in their late twenties at American River College who, for one reason or another, found themselves trying to pursue their degree at a later stage in life.

Life happened for me in 2007 when I was starting my senior year in high school. I was preparing for my next journey, excited for what college life would bring. I would eventually get accepted into San Jose State University. I planned to graduate in 2012 as a journalism major. I would be leaving Sacramento, I would be be on my own, doing my own thing.

Everything was going according to plan until the most shocking moment in my life happened. My dad passed away suddenly and unexpectedly and it would alter my life entirely.

I finished out my senior year of high school and graduated in 2008. I was probably still in shock from what had just occurred a few months prior but I continued with my plans to go to a four-year university.

I tried my best to get through my first year, but the combination of trying to balance school, being away from home the first time and losing my dad was too much. I had to come back home.

Fast forward to 2013, the last time I was a full-time student at ARC. In the time I had come back from San Jose State, I would bounce back and forth between working full time and taking a few classes here and there. I never fully dedicated myself to finishing up my associates degree, let alone my bachelor’s degree.

A community college houses many type of students from many different backgrounds. Some students are fresh out of high school, some are married with children, and there are some who are piece by piece attempting to finish up the goal of a degree they set out for themselves.

I am in the category of students who are, piece by piece, trying to complete a goal that I thought would be much easier and quicker than I had ever imagined.

There’s nothing fun about getting to the education portion of a resume and the only thing you are able to write down is high school diploma. It sucked at 23 and it definitely sucks at 29.

When I committed to going back to school, I was excited but also filled with anxiety. I had not been in a classroom setting in almost six years.

There were a lot of nerves. A lot of worries. How was I going to get back into the flow of having homework, test and due dates. Six years and a lot of bad habits was going to be hard to break.

One benefit of being away from school for so long is that I had the chance to reflect on all of my shortcomings that led to my education being delayed. With the benefit of hindsight and failure, I was able to tweak the little things that had previously hampered me.

I had to spread out dedicated time to study for certain classes. I had to hold myself accountable for meeting that exact time frame every day. It sounds like a logical and simple concept, but six years ago that simple concept just wasn’t so simple. Talking to a professor after class if I was confused about a lecture. Although it seems like common sense for some, back then I told myself I’ll figure it out on my own.