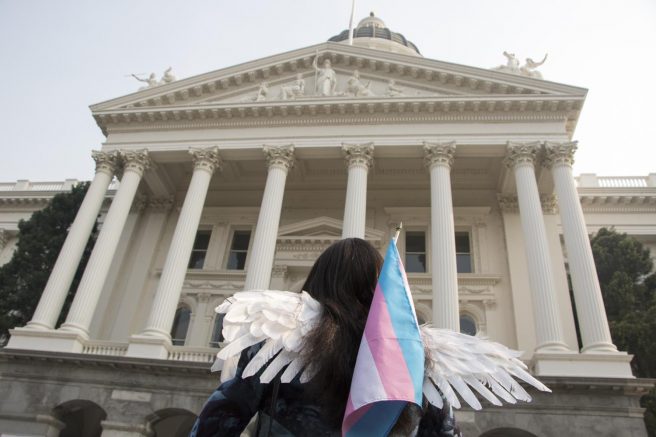 A protester carries a transgender pride flag and wears angel wings during the #StillHere Capitol March & Rally for Trans Justice at the California State Capitol in Sacramento, Calif. on Nov. 10, 2018. The wings symbolize the many transgender women who have been murdered. (Photo by Ashley Hayes-Stone)

In October, a note was released containing details of the Trump administration’s plans regarding LGBTQ+ rights. In particular, the plan affects trans people’s rights in schools, and could put thousands of students in danger.

Currently, aspects of a guideline for public schools released during Obama’s presidency, such as the inclusion of gender identity as a part of “sex,” are being reconsidered by the current administration. Some of these rights have already been taken away in the meantime.

A new memo from the Department of Health and Human Services stated its intention to redefine “sex” under Title IX as “either male or female, unchangeable, and determined by the genitals that a person is born with,” according to an article by the New York Times. “Any dispute about one’s sex would have to be clarified using genetic testing.”

Title IX is a law in United States education that prohibits discrimination based on sex,which specifically includes gender identity as mandated by guidelines released by the Obama administration and signed by the Departments of Justice and Education in 2016. Using time and money to genetically test students to prove their biological sex is invasive, invalidating, and unnecessary, and seems to contradict the original purpose of Title IX.

The proposed new definition could nullify legal changes that some trans people have already made, such as name changes on documents, and make it harder for them to pay for related health or legal services.

The length at which the federal government has gone to dehumanize LGBTQ+ people is outrageous, and these are decisions that the state won’t be able to ignore. These changes in policy normalize transphobia, and will increase hate crimes and violence on campuses.

Some LGBTQ+ people are only ‘out,’ or open about their gender identity or sexual orientation in certain settings or aspects of their lives — some only at school where they can be a part of communities of people who may be more educated or aware of gender nuances.

California passed the Gender Recognition Act in September, which applies to educational institutions and goes into effect in 2019. This bill not only made it easier for students to change their affirmed name and pronouns on paperwork at school, but legally recognized non binary people as well. This bill came at a time for progressive change for colleges.

There are increasingly more LGBTQ+ resource centers on college campuses like the Pride Center at American River College that educate and unite members of LGBTQ+ communities and their allies. ARC is also in the process of creating an intersectional Equity Plan, in which the school hopes to address the academic needs of students in different marginalized or underrepresented communities. Unisex bathrooms have been designated at many campuses after the nation debated on countless media outlets which bathrooms trans students should use.

As a young college student under the LGBTQ+ umbrella, I was initially excited to hear about the changes to these policies. It was a step not only towards more recognition and inclusion in schools, but a step towards having the fundamental rights that everybody deserves. I hoped that these changes would make it a little easier for trans students to feel safer and have independence.

However, after the Trump administration scrapped guidelines that protected trans students using the correct bathrooms at school and began dismissing discrimination cases, I should have known better than to think it would so easily allow LGBTQ+ people more rights.

The current administration is actively battling this inclusion and in this case, curriculum in education, and I worry about the outcome. All students — LGBTQ+ or not — deserve an education that is relevant and up-to-date, and this includes teaching intersectional diversity.

The note cited by the New York Times was a draft, though a revised version of the plan is expected to be released by the administration soon. The two legal issues that will be affected are under the Department of Health and Human Services, and the Department of Education. These regulations have to do with harassment based on sex at schools and certain health programs.

Adding leeway to the government’s definition of “sex” was supposed to aid in the implementation of services and protections for trans people. With the deletion of all mentions of trans people from the government’s website, the United States is entering yet another era of revisionist history. Trans, non binary, and gender nonconforming people exist and erasing words won’t change that.

The inclusion of trans, non-binary and gender nonconforming people is not optional. We are not just a new fad, “snowflakes,” or any other dismissive phrase that socially-conservative cis people use.

Trans and non binary people have always been a part of history. There have been studies on the gender binary and intersex people that have proved time and time again that the limited view of gender and biological sex that is being taught is not accurate in expressing the range of human experience.

Be the first to comment on "Trans rights are not optional"