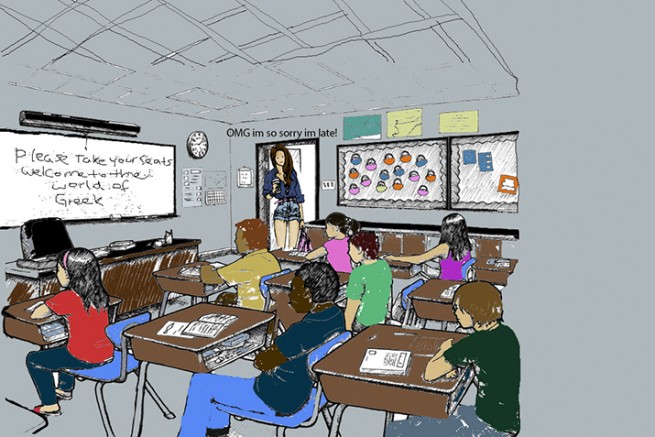 Some students think being late a few minutes isn't a big deal, but they negatively impact the rest of the class when they do. (Illustration by Allante Morris)

A previous version of this story was captioned as “Students show up late to class Art. by Allante Morris,” and it has been changed to reflect proper AP style.

Students may think that being late to class is no big deal, but it affects so many students who put in the effort to be on time. Just the noise that late students make while going through the door and then finding a seat can be annoying, obstructing the learning process.

It is not fair to the students that do show up on time every day ready to learn. It’s not like class starts at different times every day; class begins same time every day, so getting to class on time should be easy enough.

“I used to tell my students that if they were 10 minutes late, don’t come to class at all, but I had to abandon that policy,” Bethel said.

The problem with late students is that they disrupt the entire class and they don’t seem bothered by it. They make noise that causes students to miss part of the lecture.

American River College student Junior Lor said that “late students are very disrupting,” and that “it happens a lot, depending on the classes.”

This disruption is common for students in Raef Hall, which has doors that slam loudly every time they are opened and then closed.

With 70 students or more in a lecture hall, this is a problem. Slamming doors is as bad as fingernails on a chalkboard.

Late students don’t just affect their classmates. They can throw off the professors as well, who sometimes find themselves distracted and having to start over. They have to repeat the same information over and over again if it is important, which causes on-time students to lose interest.

One solution is to start the lecture with the most important components. This causes the late students to miss critical data, which incentivizes students to show up on time. Students could be called out for being late, or professors could have an attendance grading component to their classes.

It is understood that some students have other classes, jobs and children that cause them to be late, but most students find a way to be on time, so why can’t the late students make proper arrangements so they can be on time?

Being on time is a sign of maturity, being late is the opposite of mature, and at the college level it takes a big chunk of maturity to be successful. Being dependable and timely are some of the most important qualities an employee can possess.

After all, college students are adults and they are functioning in the adult world. If they came to work late every day they would be fired. College is supposed to be getting students ready for the job market.

Habits that are learned or continued through school are hard to break as they enter the workforce, so the goal is to break the bad habits now. Set your clocks earlier, leave home sooner, don’t stop for that latte, and get to class on time.

A great way to look at this problem is a widely used quote, “If you’re early, you’re on time; if you’re on time, you’re late.” Use this phrase as your personal mantra and you will always be on time.

Joe Padilla is a first-semester student on the Current. Joe is majoring in photography and plans to transfer to a four year college after graduation.

Be the first to comment on "Opinion: Stop being late to class"