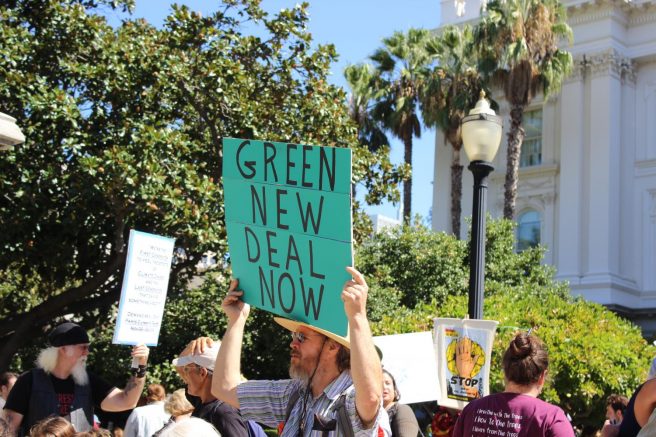 Hundreds of people gather at the California State Capitol to protest climate chnage on Sept. 20, 2019.

With next year’s presidential election rapidly approaching and global temperatures climbing on a yearly basis, questions about the effects and prevention of climate change are rising as well. What humanity will do to save itself is at the forefront of social and political conversation.

The Intergovernmental Panel on Climate Change is a body of the United Nations dedicated specifically to providing the world with an objective and scientific depiction of climate change. Its members believe that scientific data shows the effects of climate change are only going to get worse, especially if no action is taken.

“The range of published evidence indicates that the net damage costs of climate change are likely to be significant and increase over time,” according to the IPCC’s website.

On Friday, Sept. 20, students of all ages around the world united during the Global Climate Strike. The climate strike was inspired by “Fridays for Future” creator Greta Thunberg, a 16-year-old Swedish climate activist who sailed across the Atlantic ocean in a solar-powered yacht as an act of protest against the harmful effects of air travel.

Thunberg brought with her a message: climate change reform now.

“Young people must hold older generations accountable for the mess they have created,” she said during the World Economic Forum.

The Green New Deal may be one answer to the problem of climate change. The deal is a 14-page proposal published in February, originally submitted by Representative Alexandria Ocasio-Cortez (D-NY 14th District) . It outlines a plan for combating climate change while reforming society over a span of 10 years. Many Democratic presidential candidates for the 2020 election co-sponsored and support the Green New Deal including Cory Booker, Bernie Sanders and Elizabeth Warren.

ARC has also started taking active measures to reduce its impact on the planet. Don Reid, the college’s Chief Sustainability Officer since 2008, said current ARC president Thomas Greene has promised that the school will be waste-free by 2025, through implementing recycling and composting programs as well as standards for all new construction.

Greene, however, recently announced that he will retire at the end of the spring 2020 semester, which means he won’t be here to see through on his promise.

“UC’s and CSU’s already have programs like this in place,” Reid said.

However, Reid also said community colleges across all of California are exempt from any federal mandates. Because of this, the new president could potentially eliminate the plan to be waste-free in the next five years.

Most of this success can be credited to him. As well as working as the chief sustainability officer, Reid also runs the school’s printing services department.

Reid said ARC has been supportive of his initiative and purchased new technology, at his recommendation, costing over half a million dollars to ensure that all materials being used for signage on campus are recyclable and that nothing coming out of the shop will go into landfills.

Reid says he believes everyone can and should do more to fight climate change.

“In my opinion, it should be in all of our job descriptions,” Reid said.

The new colorful signs popping up around campus were printed directly onto the old signs using a latex printer and water-soluble inks. Several compost bins have been added to campus as well as appropriate signage labeling what items can be thrown away, recycled or composted.

Reid says that the introduction of the Green New Deal has advanced the discussion of climate change and it is now taken more seriously by students and faculty members. He regularly represents the college at climate change conferences such as the California Higher Education Sustainability Conference.

According to Reid, UC’s and CSU’s have entire departments of people that work daily on perfecting and implementing climate action plans for their campuses but for ARC it’s only him.

“I have a big green hand, I’ll raise it twice,” Reid said.

He says he believes the school could be doing more to ensure the best possible future for their students. He says ARC is about five years behind the UC’s when it comes to a climate action plan.

Glenn Jaecks, a geology professor at ARC, is active in the campus community in its effort to reduce the effects of climate change. He is working on integrating climate change into all classes.

“People have to come to the realization that it’s not going to change by itself,” Jaecks said.

Like Reid, he also believes that the campus may not be doing enough to stop the progression of climate change. ARC currently has more than 30,000 students and in a sense, more than 30,000 carbon footprints.

Both Reid and Jaecks said that the return on investment isn’t there for bigger programs such as the school switching fully to solar power.

Two questions remain, is there still enough time to make a difference? Could ARC be doing more?

Adrian K-Bridges, a biology major, said ARC is helping the fight against climate change in the way of solar-powered charging stations but that more could be done specifically regarding issues of transportation.

To change things on campus Reid suggests writing letters as a group or an individual to ARC faculty, letting them know what changes students want.“Students being involved is going to do more than the Green New Deal,” Reid said.