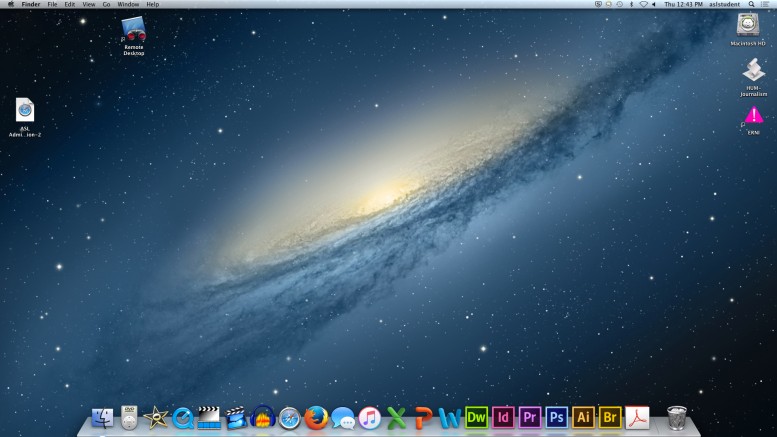 A screenshot of a faculty member's computer shows the emergency response notification icon, or ERNI, near the top, right corner. The ERNI was installed on computers of faculty and staff as part of the American River College administration's Safe Campus Initiative. (Screenshot of ARC faculty computer)

In an effort to increase campus safety, many faculty members’ computers across campus were installed with a program that allows the user a new avenue to contact campus police.

The Emergency Response Notification Icon, or ERNI, appears as a bright pink triangle with an exclamation point in the center on the desktops of American River College faculty member computers.

The program was a joint effort between the Los Rios police and the Information Technology department, according to Adam Karp, the dean of planning, research and technology.

“ERNI was created as an alternative to picking up the phone and calling the police,” Karp said. “It’s a discreet way to contact the police without being seen on the phone.”

The user needs only to click on the icon, even if to move its location on the desktop, to begin the process. Once clicked, the icon prompts the user to give his or her name, location, and some brief information on the situation before sending an email to dispatch who then send out responders to the area.

If the icon is clicked on by mistake, one should call campus police.

If the icon is accidentally deleted, it will appear on the desktop again once the computer is rebooted.

According to American River College President Thomas Greene, ERNI is an expansion of a similar program that used to be found only in the counseling office.

“The expansion came out of the Safe Campus Initiative,” Greene said. “Now it’s changed in order to reach a wider audience, but the concept already existed and was used in some iteration in the counseling office.”

The original program, which was called the Panic Button, was limited in what it could do, according to Judy Mays, dean of counseling.

Mays went on to say that working around the button on the desktop was difficult at the time as well.

“The icon was sensitive, I couldn’t move across the desktop without signaling the police.”

Karp and his team of technicians are working to update each department’s computers with the program, but says the effort requires the involvement of the staff in each department as well as information such as the location of each computer and who uses them.

Karp had the dean of each department provide a list of staff, the location of each computer and identify whether the computer is a PC or Mac.

Once the information is received and an IT technician checks that each computer has been identified correctly, Karp sends an email to the dean to notify the staff that the icon will appear on his or her computer within one to two days.

Karp expects the icon to be on each faculty member’s computer within the next few weeks.

Karp stressed that the new system is not meant to replace picking up the phone and calling the police.