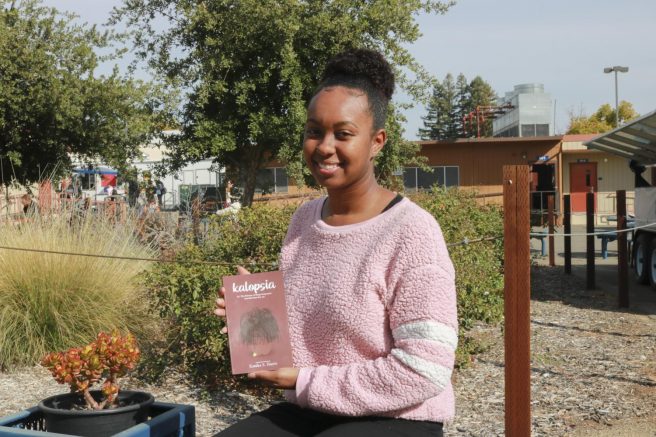 Writer Kanika Harris, pictured here at American River College on Nov. 12, 2019, with her new book of poetry. "Kalopsia," explores the beauty and struggle of the transition into adulthood. (Photo by Bram Martinez)

Harris defines Kalopsia as, “a condition, state or delusion in which things appear more beautiful than they really are, but it can also be defined as ‘beautiful sight’ or ‘with beautiful eyes,’” which has a Greek root in kallos meaning beauty, and opsis meaning sight, according to the site, yourdictionary.com

“The theme is just 20-somethings, being in a place where you are an adult, and everything is out of control, but you have that dreamers mentality,” Harris said.

The poems are for young adults trying to figure things out, who are just feeling lost in the world around them, according to Harris.

“She has a beautiful way of writing from the core of the soul that allows the reader a chance to feel her experiences on an emotional and personal level, as if we are privy to something deep,” Gaines said.

Harris writes her poetry depending on the phases of her life, as each one might hold something different.

“I wrote because of the stage of life I was going through [when] I had a certain mentality,” Harris said.

Because she’s an outreach specialist, Gaines was able to give her some advice during the event about changing mentalities while aging.

“The first step is to believe in who you are, even though you might not know which way you’re heading, you will find your way, especially if you don’t compare yourself with others,” Gaines said. “Affirm daily that you have value and strength that you are meant to be here and that everything you need to exist in this life, is already inside of you.”

Harris’ favorite poem reinstates the idea of finding oneself, especially after being lost, but how Gaines says, maybe the answer is inside.

“My favorite poem [in my book] is ‘Mother Earth,’ [which] is about [experiencing] loss, feeling lost, and finding herself [the character in the poem]  in nature,” Harris said.

Harris said she plans to write another book full of poetry and short stories soon. “Kalopsia” is available for purchase at Barnes and Noble and Amazon.