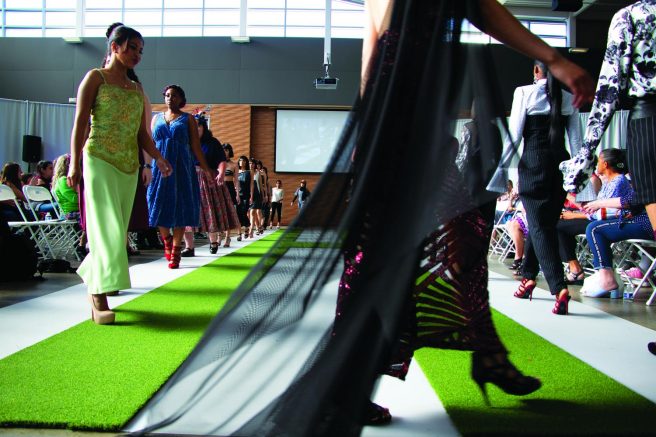 Models walk the runway in the Student Center during the finale of the 18th annual fashion show “Homogany” put on by the American River College fashion department on May 4th, 2019. (Photo by Ashley Hayes-Stone)

A large grassy “H” stretched down the runway, on either side of which seats quickly filled as the clock ticked closer to showtime. A hush fell over the crowd as an introduction video began to play, illustrating the hard work and dedication placed into creating the American River College fashion show.

On May 4, the American River College fashion department held its 18th annual fashion show, celebrating life, culture, heritage and everything in between.

This year’s theme was “Homagony,” a word dreamed up by the Fashions Promotions class and used to describe the change and passing down of tradition and the formation of something new.

“We pay homage to those that inspire us,” the voiceover announced in a tremulous voice. “To define Homagony: Deconstructing Borders.”

The show opened with Nicole Lewis’ collection “Timeless” — a revamping of classic looks from the 1950s and ‘60s into a modern setting. Models draped in ballet pinks and hand-dyed navy blues walked to Queen’s “Killer Queen.”

This was followed by Diana Collins’ “Springtime in Kyoto,” inspired by photos her husband brought back from a trip to Japan. Described as “contemporary sportswear,” the collection featured airy hand-dyed blue hues married with lace pieces and pops of red Japanese-inspired silk.

Tamika Huff presented “Culture,” sampling from her own style and West African influence. The first model donned natural hair and a shimmering asymmetric dress that flowed like molten gold. The most notable details were the fringed hems that bounced with each step the models took.

The show took a political turn with Laila Allathkani’s collection “Modern”, who derived inspiration from the women of color elected to Congress this year. Each of her models wore hijabs and elegant, flowy pantsuits, featuring fur cuffs and pops of blue, green, maroon, and gold.

Shannon Malnicof’s wrapped up the student designer segment with “Shattering Glass Ceilings,” a bold remix of the working woman shown through a monochrome color palette with wine-colored accents and pinstripe patterns finished off with a glittery sequined evening gown.

Guest designer and winner of last year’s “Most Marketable” award from the ARC fashion show, Quynhnhu Nguyen presented a collection inspired by her fluctuating mental states. Each model sported a bobbed haircut that was as sharply cut as the silhouettes, which featured yards of leather, zipper details, and cagelike fabric inserts.

At the end of the event, fashion instructors Anne Dieu and Dyanne Marte took the stage to announce that the 2019 Elizabeth Carlson Fashion Scholarship would be awarded to Diana Collins.

“I was so surprised,” Collins said, beaming. “I had no idea it was coming! It’s great. It was nice to be recognized.”

Everyone was in a buzz after the first show, but none more so than the designers.

“[The show] was so exciting!” Onwukwe said after the show. “I really enjoyed it. I thought it would be nerve-wracking, but it was actually pretty chill. [Seeing my designs on the runway] was like magic. My vision really came to life … I was overwhelmed with happiness.”