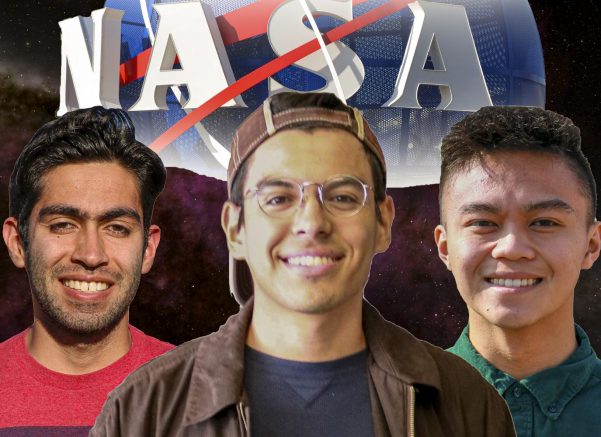 Earth seems big, but as time goes on, the places that humans can explore on their planet diminishes so there are only a few directions to go, down to the blackened depths of the ocean or up to the starry sky.  One such route to understanding, and eventually exploring a place where 80 years ago would be thought impossible, is of course National Aeronautics and Space Administration (NASA). But in order to understand and eventually implement  ideas to make such science fiction dreams possible, new minds must be found, for the Earth is very small in comparison to the ever expanding cosmos.

After they applied, the students took a five-week course online that ended with a project this month.  If a student passes, they ended up at one of the United States NASA centers for a weeklong workshop late December 2018.

Computer science major Omar Costillaand mechanical engineering major Jesbaam Sanchez were both sent to Mountainview NASA center. Aerospace engineering major Jedidiah Alindogan went to the San Jose Ames research center. During the first round, they each had a competitive project to complete, which involved building a prototype Mars rover out of Legos and programming it to pick up rocks and scan minerals in a span of six hours.

“We were having a lot of trouble with our UltraSonic sensor on our rover. We put it on an angle which messed up the trajectory,” Costilla said.

Out of the teams, Alindogan’s team won the entire competition.

“It’s not based on completing the objectives 100%, it’s on working on media, or how your team works on presentations or selling the product in general,” Alindogan said.

During the second round, the goal was getting the rover to successfully pick up hot wheels and escort them back to base.

“It really was an amazing experience watching it take its first steps,” Sanchez said.  “We outperformed our parameters.”

Aside from the project, the students said they toured around the facility and saw some of the equipment such as centrifuges—the objects astronauts use to spin around and get acclimated to g-force(gravitational force equivalent). They also got to see a rail gun that was 16-feet long, which was a miniature version of the real thing, built to scale. According to the students, they were not able to use the equipment. Near the rail gun, they had a display of things that they had shot for fun and science.

“A guy apparently got hit with 50 g’s (g-force unit) for 0.2 seconds for science, only suffering popped vessels in his eyes,” Costilla said.

On Alindogan’s end, they got to see a wind tunnel, which is a closed off tunnel with a window that they use to test out aerospace vehicles with a high velocity of air blowing about, like turbulence.

“We also got to see a three-dimensional simulator that has the user experience g-forces, like being in a helicopter or a jet,” Alindogan said.

They were also able to meet people employed in various fields of study the students share an interest in.

“I got to meet with fellow engineers, scientists, chemists, biologists which would help form a community of students everywhere in the U.S.”  Sanchez said. “Meeting these students and these scientists who gave their time to meet with us and sharing their experiences opened up my eyes on what NASA is really all about.”

At the end of the program, the facilitators talk about the NASA internship program, which has different branches from various technologies, manufacturing, testing and application.

“They gave us information on the NASA internship program, in case one of us want to join, I am defineitley applying [for the] spring semester,” Castilla said.

NCAS is available to all students, but being connected by STEM is a requirement .  According to the site (which is where you apply) all one has to do is fill out the questionnaire, have completed nine hours of STEM coursework, write a 300 word essay, get recommended by a professor in addition to taking the online course.

“If you are working on engineering, or if you want to work at NASA, or have a passion for it, you can meet other people who have similar passions from all backgrounds who love to learn,” Alindogan said. “You meet people who are passionate about academics.”

All three students say they wish to take the internship for different reasons and they all want a career in NASA.

“People should apply. I’m applying [to the NASA internship] for the summer of 2020 for their robotics division,” Sanchez said.

They all say they want to put their experience into application, and share a love for NASA.

“I want to work at NASA, with drones, or if possible I am down to be an astronaut that would be super fun,” Alindogan said.