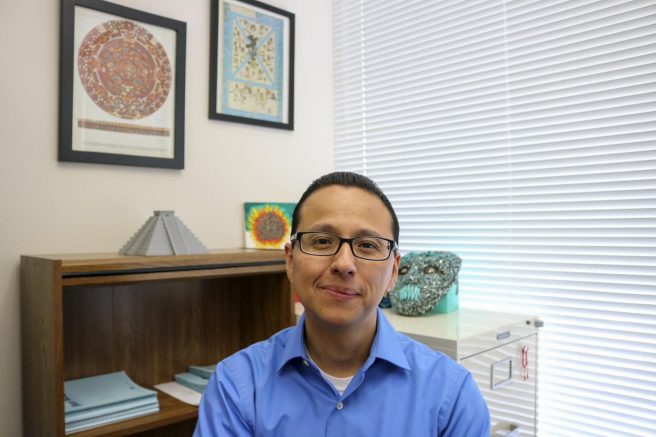 When it comes to history, it can be considered one of the most boring subjects to learn about and many students may just want to take any regular history class to just be done with it. American River College history professor Ricardo Caton doesn’t only make history sound more interesting when he teaches, however, he also is able to share the passion he has that can get students really involved in the subject.

Caton has taught at ARC since spring 2015. While Caton may seem like another regular history professor who only invests in the small sphere of ARC, he does a lot for the greater Sacramento community as well.

According to Caton, students may not know about the class or show any interest, because it may not meet a student’s criteria to graduate or it’s just not a strong area of focus in general. Although the number of students who take the Latin American class do increase with each semester, they only go up little by little and Caton says he feels that there is a great importance to the classes he teaches at ARC.

At the start of the 2019 fall semester, Caton’s Latin American history class had a total of 19 students enrolled. As the class has progressed, while he says he hasn’t officially dropped anyone from his class, only about 12 students show up regularly every week.

According to Caton, Latin American history does meet the criteria for anyone with a history major and it is a transfer level class, however If the class doesn’t have a major increase soon then there is a chance that the course will be canceled at ARC.

“Since we’ve been offering Latin American history the numbers have increased within the past four years, which is a trend I hope continues but it currently doesn’t meet that multicultural criteria,” Caton said. “It just seems ridiculous because when you learn Latin American history, it’s one of the most multiethnic regions of the world, but it’s just a matter of going through the process here at ARC and going through curriculum to make sure it does meet that criteria.”

Along with teaching history, Caton is also the advisor for the Latinos Unidos Club and has been working with the club since he started at ARC in 2015. According to Caton, Latinos Unidos doesn’t only help their students with their schooling but also helps them and other people learn more about Latin American cultures and relations.

“We participate in events locally such as the Day of the Dead event at Oak Park during the [fall],” Caton said. “We try as much as possible to present these events to the campus and the community, as well as reach out to other Latain American groups around the Sacramento community.”

Caton said he really enjoys teaching this kind of history and participating in the events both on and off campus because he wants to teach as many people as he can about Latin American culture. He always makes the point on how Latin American history plays a big role in not just learning U.S. history, but also learning about how the culture and heritage is important in this day and age.

Caton’s students have said they find the class interesting and enjoyable. Jance Dunne, a student from his Latin American history class, said Caton is a fair professor.

“I like how he doesn’t do strict lectures but still gives us the information we need,” Dunne said. “He gives everyone a chance to learn the material in the right way to pass this class.”

Ariel Soto, another student in Caton’s Latin American history class, explained how his method of teaching also helps her and other students stay focused in class, compared to other classes at ARC.

“The emotion he brings into his lectures is great,” Soto said. “He’s not like other professors who just casually explains what they’re teaching – professor Caton gets excited about what he teaches us and it makes me want to learn more about this subject.”

Antonio Parrales, another student who takes Caton’s History of Latin America to 1830 course, said he believes that Caton is a good professor to have and that the Latin American course is a good class to take.

“Professor Caton gets a 10 out of 10 from me,” Parrales said. “He gives us more information than we need but in a way that helps us to do well in this class. This class is also a good way to help me learn about my heritage and culture.”

This story was updated on Dec. 3, 2019 to correct the season of Day of the Dead.