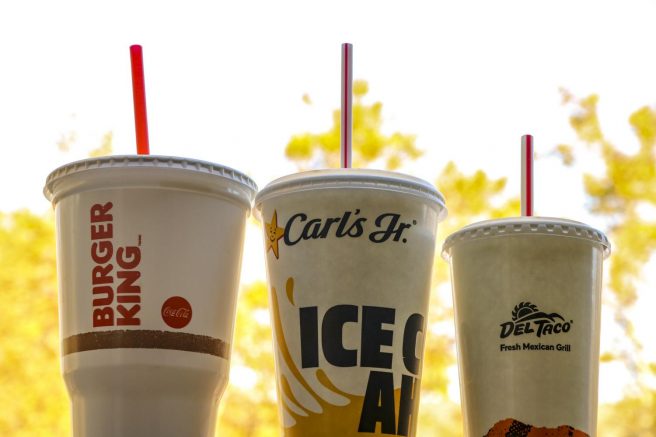 Many fast food companies have added plant-based alternatives to their menus as of 2019.

Vegetarian fast food options are no longer limited to quesadillas, salad and french fries thanks to meatless meals, which have become more than just a trend.

Fast food companies used to boast about their 100% real meat products, but now the newest items on popular menus advertise meat-free, plant-based products. Meat-free items are advertised as looking the same as meat, but the question on everyone’s mind is: how do they taste?

In Sacramento, Carl’s Jr., Del Taco and Burger King have all added plant-based items to their menus.

In January, Carl’s Jr. began offering Beyond Burgers, which contain 20 grams of plant-based protein. The patty is also free of gluten, soy and GMOs.

The Beyond Famous Star tastes like a burger, but it is much lighter and has a slight vegetable taste. It is easily made vegan without cheese or mayonnaise.

The patty has a red color to mimic the look of actual beef.

“The patty changes color as you cook it,” according to Carl’s Jr.’s website, “Beyond Meat uses trace amounts of beets that lend a meaty red hue to the Beyond Burger.”

Del Taco was quick to follow Carl’s Jr.’s vision and added Beyond Meat to its menu in April. The Beyond Taco contains 19 grams of protein but unlike the Beyond Burger, it is not certified as soy or gluten-free.

Del Taco’s Beyond Original Tacos certainly look like average fast-food tacos, but their taste leaves something to be desired. The look and feel of the Beyond Beef Crumbles are nearly identical to taco meat, however, it is far saltier.

“We saw a unique opportunity to develop our own recipe in partnership with Beyond Meat, adding various spices to create a signature Del Taco taste consumers can’t get anywhere else,” said John Cappasola, President and chief executive officer of Del Taco, on Del Taco’s website.

These tacos are a great option for vegans and vegetarians alike with a topping choice of avocado or cheese at no extra charge. There are several other new items on the Del Taco menu that include the Beyond Beef Crumbles such as the Epic Beyond Cali Burrito.

Burger King’s Impossible Whopper is definitely the closest of the three to the real thing. It has a charbroiled flavor that is only comparable to a real beef burger. This burger can also be made vegan without mayonnaise.

Burger King had already been serving a veggie burger since 2002, making them way ahead of the game, however, it is not able to be made vegan because the patty contains eggs. The Impossible Whopper is a huge upgrade from the veggie burger that they had before, both in flavor and ingredients.

By themselves, all three of these items satisfy the craving for junk food but compared to their meat-based counterparts they do lack that rich taste most consumers look for at a fast-food restaurant.

The plant-based movement seems to be impacting one chain restaurant after another.

KFC began serving Beyond Chicken on Aug. 27 at one Alabama location as a test for its new product. The Beyond Chicken was so popular it sold out in less than five hours. KFC called it a “Kentucky Fried Miracle,” according to the New York Times.

They have not yet announced when Beyond Chicken will be available in all KFC locations, but the success of the product suggests it will be hitting the kitchens soon.

Other restaurants such as Taco Bell have started marketing vegetarian items as well although they do not serve fake meat products. Taco Bell proudly announced that they serve 36 items certified vegetarian by the American Vegetarian Association.

These items combine together to make delicious and meat-free menu options such as the Black Bean Crunchwrap or the 7 Layer Burrito.

“I eat meat but I think it’s cool that companies are trying alternative options, I don’t know if I would order it myself, but I have vegetarian friends that would,” Steven Chavez, business major said.

It is important to note that all of the previously mentioned products are cooked on the same surfaces as meat and the risk for cross-contamination is present.

For some vegans and vegetarians, this may pose a problem but for omnivores looking for a healthier option at the drive-through, consider giving one a try. Participating in the chain of supply and demand is a direct way to insight further changes.