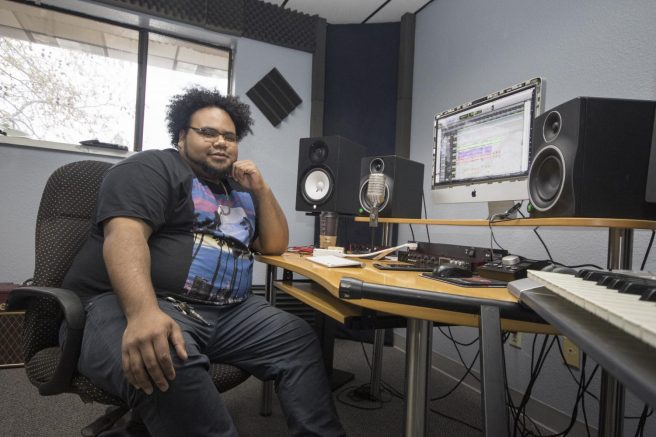 A few miles out of downtown Sacramento, Jesse Hanes sits at a desk surrounded by speakers and walls lined with acoustic foam, scrolling through Spotify on a large screen to check for new releases.

Though the new music studio, Think Tank Productions, doesn’t have much equipment in it yet, the American River College alumnus is one step closer to his dream of making music full-time. It’s only been open for about six months, after over a year of planning with the help of his collaborators.

Hanes, otherwise known as Kassette, has plenty of work to do, between preparing music with his new group Busta, producing albums and teaching guitar lessons.

Kassette was living in Lodi when he decided to move with a friend to Sacramento to attend ARC and pursue music in 2014.

“A buddy of mine … [wanted to] do acting, and I was like, ‘Supposedly there’s a cool program over at ARC for audio and I know they got theater,’ … and so we moved out here together,” Kassette says.

Kassette grew up in Lodi as ‘the pastor’s kid,’ and as a teen, attended four days a week to lead youth groups in music and drum for the church band, which kept him both off the streets and practicing music.

Though he played instruments as a teen, he didn’t always see himself pursuing music through attending college.

“You know, when I was younger I didn’t even know (college) was an option. I was just a little hood kid. Like I grew up with gangsters and drug dealers,” Kassette says. “My dad just happened to be a pastor, so it kept me out of the life.”

His dad became a pastor after leaving behind a life of dealing heroin. The crack epidemic in the 1980s caused some complications to his home life, and his uncle, who he refers to as his dad, took Kassette in as his own.

“[My uncle] took me, and the rest of the family took my sisters in and my brother and so they kept us all together in Lodi and Stockton,” he says.

After attending high school, Kassette felt unfulfilled, and after a period of homelessness at 19 and picking up debt from attending an expensive college in Oregon, Kassette was ready for a change.

“Being that our generation is the first generation to not be more financially stable than their parents; that’s a big deal to me. … We are financially in a deficit, as youth. So I feel like with this resurgence of things just not being affordable, people are starting to realize we need to create opportunity; not government-wide, but city-wide — it’s gotta start where you’re at.”

He moved cities with just enough money for an apartment deposit, and was able to land a job as a line cook and started working the day after arriving in Sacramento.

Classes were easy to devote himself to, according to Kassette, who says he researched the recording process before moving. He wanted to be certain about what he was getting in to with the program.

“I was coming in with the idea that like, I wanna mix and I wanna know what I’m doing so I can make things sound good,” Kassette says.

Securing a job and apartment gave him a foundation to living in the city, though he continued to face challenges in addition to attending classes and juggling jobs to make ends meet.

After moving just after what he described as “the toughest couple years of my life,” Kassette faced multiple losses in his family that year. On the first day of class, his sister called him with some bad news: His mother had stopped breathing and died unexpectedly.

“Literally midnight, the night I started school at ARC … I get a call and they’re at the hospital and my mom passed away,” Kassette says.

He attended the first two days of classes to secure his spots and missed the rest of the first week, then threw himself into his studies and work, taking multiple jobs at a time to support himself.

“I worked every kind of different job that I could to make a living and go to school full time, so … it’s been a process just to get here,” Kassette says.

After earning a stipend of money from a semester as a drumline instructor at a high school, Kassette bought his first set of equipment and began recording audio in his room — where he worked up until last year — while going to classes in the day.

Kassette finished all of the units required to complete the program, and although he hasn’t officially graduated, attending classes in the music department taught him to be dedicated to his art.

“So it was endurance, I feel like is what I learned to do at ARC. … Endurance and really being about your art,” he says. “People only take you as seriously as you take yourself.”

He says he is grateful for the patience shown to him from the music professors at ARC, and that in particular Professor Merlyn Van Regenmorter inspired him.

“He was serious about the stuff, you know, but he was also understanding,” Kassette says. “Hearing his work and how his attitude (is), it made it easy to adjust, and it made it something that I could dive into and really be about.”

Some local musicians and former ARC classmates Kassette works with include DJ Czechmate, with whom he recently released a music video. Both were also nominated for Sacramento News and Review’s 2019 Sammies Awards earlier this year; Kassette for both hip-hop/rap and producer/engineer, and Czechmate for deejay.

“Czechmate was my first interaction with the scene in Sacramento, and I met her at ARC in music business (class),” Kassette says.

As of lately, he’s working at Think Tank Productions with musicians and podcasters, and his new group Busta. Kassette is still getting the foundations down for the label, Think Tank Music, but says they plan to help musicians with anything they need help with; not only recording or producing the music, but branding and merchandise.

“For the last ten years I’ve been wanting to open a studio, just in my heart [I knew] this is the thing I want to do.”

Busta member Jesse Szabo is a music composer and producer who attended ARC with Kassette and helped bring the studio to reality.

“Think Tank Studio has been awesome. We’ve gotten to grow an incredibly wholesome network of people that have the right vision on community and what it means to be an artist,” Szabo wrote in an email to the Current.

Though the two met in the music recording program, they didn’t make music together until a few years later. Szabo says working with Kassette always makes him want to work harder.

“[Kassette] knows how to bring the best out of an artist through composition of music and performance in the studio,” he says. “He doesn’t tell an artist what to do, he helps them make the great stuff greater.”

The two are now are in a band together, self-described ‘neo funk-hop’ band Busta, along with their vocalist Brittany Sellers, known as Zahkia. The band released its debut single on Valentine’s Day, titled “It’s Only Love,” featuring local artist Shane Q.

“My vision for the music in this group is to make people want to dance. That’s it. As long as it’s drenched in funk and bass then I’m happy,” Szabo says. “Our singer Zahkia owns the stage and has attitude for days.”

Kassette also works with musicians who aren’t based in Sacramento, like his other three-member band #Trending that released its album after two-and-a-half years of work.

Though he says he is already lucky to work with the artists that he does, Kassette is assured that Sacramento’s music scene is only going to get bigger and better. Seeing the success and the sense of community has inspired Kassette to push himself in his career.

“I’m just in the middle of it all, you know I’m more like the eye of the storm, watching everybody around me go through this stuff while I’m just getting in,” Kassette says. “And they’re all having my back and that’s the scariest part, because now I have to deliver.”