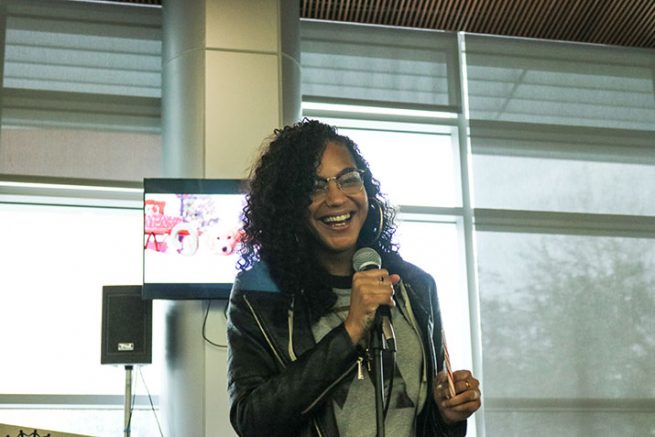 Grace Deyanna takes a break from hosting to recite her poem, “Newsworthy” at Tell it Tuesday in the Student Center on December 4, 2018. (Photo By Felix Oliveros)

Be the change you want to see in the world.

Some people may have heard this saying before, and for some, it’s taken to heart and applied daily. Some might take it and become an activist, or a vital part of a program that pushes diversity like Universal Engaging Inclusive Transformative Education (UNITE for short). Or, they might become an award-winning poet. For American River College’s, Grace Deyanna, these all apply.

Poetry has served as a major vehicle for Deyanna and has opened up the world for her. It has presented opportunities and knowledge that she has used to its fullest potential by applying it to her activism, social influence and academic ambitions.

UNITE is located in the HUB in the Student Center. There, students from different cultures and backgrounds can find a number of programs that provide resources in order to help them succeed.

For Deyanna, UNITE provides something for everyone, no matter where they’re from. From hosting open mics and brave spaces, to educational equity, UNITE strives to embrace and support all, she says.

“Our main position at UNITE is to bring diversity to campus and promote educational equity. So, we try and bring different events to campus, [like] brave spaces,” Deyanna says. “I host Tell It Tuesday…to give students a space to express themselves…we consider the education system was not really created with people of color in mind to begin with.”

Every other Tuesday, students can sign up to perform at the open mic, Tell it Tuesday, which is held in the Student Center. There, students can let their voice be heard. Some rap, some sing, some recite poetry and spoken word and some even do magic. This opportunity is something that Deyanna says is powerful and she feels privileged to host.

“It feels good to kind of balance that, spit something, host, intertwine my personality with it,” Deyanna says. “I think for students it’s definitely a powerful thing to be able to express themselves in ways that they probably wouldn’t be able to in the classroom setting…To have that in this kind of space is powerful, you get a feel, you get a vibe and then go to class, it’s dope.” 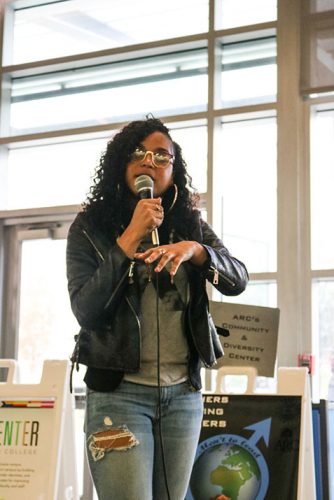 Grace Deyanna takes a break from hosting to recite her poem, “Newsworthy” at Tell it Tuesday in the Student Center on December 4, 2018. (Photo By Felix Oliveros)

Even though Deyanna often takes a backseat as host, she occasionally recites some of her own material—material that has received a lot of praise because of its powerful and expressive content. Deyanna’s work draws from real life, whether it’s social injustices she’s seen and been affected by, or tough personal trials.

Deyanna says she found poetry as a way to express and heal herself in a way she couldn’t do otherwise. She also found it as a way to have a positive effect on people after she was bullied in high school for the same voice she embraces today.

“It actually started out as a healing thing, because I’m really good at suppressing things. My first [poem] was called ‘Broken Home,’ and I remember reading that poem to my dad, and he was so shocked,” Deyanna says. “One of my biggest mottos, is turning pain into passion… I’m able to take the most tragic experiences of my life and uplift other people.”

The passion for poetry has guided Deyanna, and in 2015, her poetry took her to New York to compete in, and win, a national poetry slam that hosted poets from all over the world.

While in New York, Deyanna says she realized that higher education was a real possibility after being surrounded by women who were using school to amplify their voices. This influenced Deyanna to try and be the first in her family to graduate college. Around this time in her life Deyanna’s passion for activism also increased.

However in this instance, what she describes as a a rough encounter with police that she experienced opened up her eyes and got her discussing these type of societal issues.

“After that experience happened with police brutality, that kind of woke me up, that kind of was like, ‘OK, you’re a black woman in America.’ It took me out of my bubble, so that drove me into my social injustice voice through my poetry,” Deyanna says.

There were other experiences that shaped her as well.

In 2015, Mario Woods was shot and killed by police in San Francisco. After this, Deyanna says she and some women who call themselves, “The Last Three Percent of SF,” set out to try and heal their communities. These women helped propel Deyanna into activism.

“Getting involved with these ladies … gave me a platform to really start with my poetry,” she says. “When I found my way, I found it through these ladies and our activism throughout San Francisco and trying to heal our own communities.”

Police brutality is nothing new, but in recent times with cell phones deeply integrated into people’s lives, more instances are being recorded for everybody to see. In times like these, the relationship between police and minority communities is at a tense point, and Deyanna has some ideas of her own on how to bridge the gap.

People connecting to their history is something Deyanna sees as a powerful tool for the future. Through her poetry and devotion to higher education, she has been able to gain a better understanding of the world around her. While chasing this knowledge, Deyanna also found a passion for education, and making sure everybody gets the opportunity to achieve higher education.

“I had this African-American politics class at Laney College in Oakland, and up until that point, I was taught in public school that Abraham Lincoln freed the slaves,” Deyanna said. “I couldn’t believe, his reason for freeing the slaves was not because he felt that we were all equal, it was for economic purposes. [They] spoon-feed us this information like he’s some kind of hero to black people.”

Topics such as race can be a difficult thing to discuss and some may avoid it all together, but Deyanna holds nothing back. Unafraid to touch on these topics, she doesn’t shy away and says this is because of being silenced as a kid. Deyanna used her powerful voice for a poem called “Newsworthy.” This is one of multiple poems of hers hat gained attention, and in the poem she touches on the education system, police brutality, and the media.

“I think it was maybe the fact that I didn’t have a voice for so long. I was like, if I have one you’re going to feel this… my ‘Newsworthy’ poem…I never edited it,” Deyanna said. “I knew that what I said was exactly how I felt and if I tweaked it, it was going to be me watering it down, and I didn’t want to to do that, I wanted you to feel me.”

After coming so far, settling is not an option for Deyanna. After she graduates next semester, she will attend UC Davis where she’ll aim to get a masters degree in divinity and a P.H.D. in education.

Days are usually busy for Deyanna, but she knows that she’ll soon reap the benefits of hard work and expression that people have gravitated to. Graduating from ARC is a significant milestone, but for Deyanna it’s merely the beginning. Her route to where she’s at now has seen its twists and turns, but dedicating her life to activism and education has brought her to a place she thought unlikely.

“When I look back…I didn’t really envision this version of myself, and just even through my poetry, it was a way for me to find my voice, so now I’m here and excited to be making an impact in my immediate environment,” Deyanna says. “I just look forward to leaving a stamp on this campus before I go.”

Be the first to comment on "Walking with Grace"