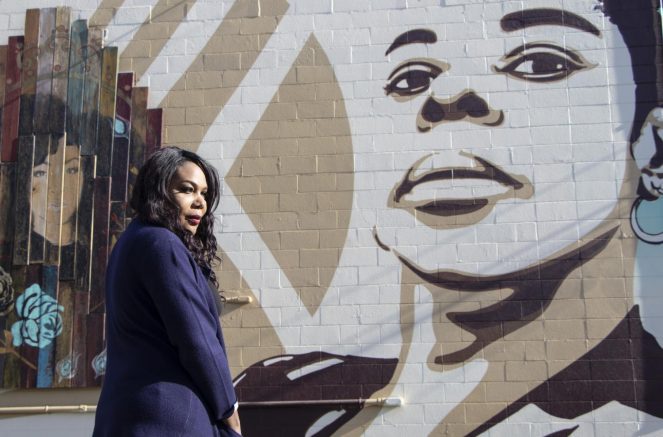 Activist Ebony Harper stands in front of the mural that she helped fund behind the Lavender Library in Sacramento, Calif. on Nov. 30, 2018. (Photo by Ashley Hayes-Stone)

In the wake of President Donald Trump’s threats against the transgender community, a call to action has been made for trans and cisgender people alike, to take a stand in solidarity.

Former American River College student Ebony Harper is a black trans woman who says she had a troublesome experience in college and encountered issues that many other transgender people face.

“I experienced the same thing [at ARC] that I experience off the campus; laughing, objectification, and ignorance,” Harper says.

Harper is a Sacramento-based activist who fights for the rights of trans citizens and other marginalized groups.

Harper was arrested in April during protests for Stephon Clark — the black 22-year-old gunned down by Sacramento police officers in March. Harper was arrested for getting between protesters and the police. After her arrest she was wrongly placed in the men’s portion of the county jail due to her biological sex. She is still dealing with those charges in court.

Harper says she enjoys breaking into spaces where she’s normally not welcomed and challenging the status quo.

“When I walk around people that don’t know that I work at the California Endowment, they don’t see me as someone to be revered,” Harper says.

Harper is a Program Associate at the California Endowment Health Foundation, an organization that works to expand healthcare access for marginalized and underserved communities.

As part of her job, Harper has worked on projects such as the Rise and Vote campaign in Sacramento, the #RiseUpAsOne Unity Ball, a DACA (Deferred Action for Childhood Arrivals) immigration team, as well as many other projects.

“Every Program Associate role is different and I’ve been blessed to lead many projects surrounding the health and wellness of trans women of color,” Harper says.

One project that Harper also worked on is the Chyna Gibson mural behind the Lavender Library in downtown Sacramento. Gibson was a black trans woman and performer from Sacramento who was gunned down while visiting New Orleans during Mardi Gras in 2017.

Harper says she has known for a long time that she was meant to be an activist and that she wanted to make her passion for people her life’s work.

“I want to humanize our experience and communities that (have been) historically rejected, pushing back on the powers that oppress our communities [through] compassionate activism and bringing healing to the hurting community through outreach,” Harper says.

Harper has never shied away from who she is and says she took pride in expressing herself at a young age. Femininity is an attribute that Harper believes people shouldn’t be ashamed of and should embrace.

“I was aware of my gender identity when I was 5 years old. I consider myself a trans woman, and I’ve always liked feminine things,” Harper says. “It feels illegal to be feminine; men can’t even be feminine without being called gay. What we call feminine like people showing affection … is a part of compassion and the human experience.”

Harper says her blackness on top of her trans identity adds another layer of intersection and thus increased rejection to her existence like many other black trans women.

“Me being black, I’m rejected by society in a different way because there’s always a look of suspicion when you’re black,” Harper says. “Then, you add being feminine-presenting and that’s another layer of oppression because we live in a patriarchal society where men and masculinity rules.”

Harper was born in Cheverly, Maryland and raised in South Central Los Angeles before making her way up to Sacramento. She says she ran away from home at 14 because her parents were not accepting of her trans identity. At 18, Harper began her physical transition with hormones and chemical therapy.

She attended ARC in 2016 as a general science major and says she had a unique experience on campus as a trans student; one where she was both accepted and rejected, depending on the environment.

“I felt like [my experience] was a double-edged sword, one where I was accepted [and] I was embraced. Some professors went above and beyond to make sure I felt comfortable in their class,” Harper says. “[Professors] don’t always have to do that and sometimes it will make someone uncomfortable.” 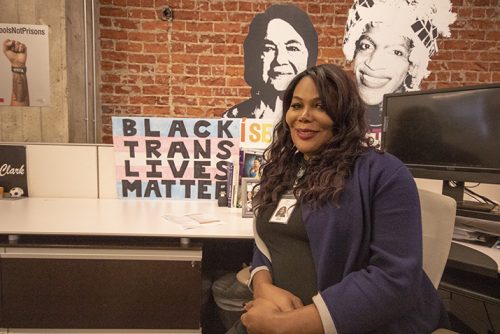 Ebony Harper sits in her desk at the California Endowment Health Foundation, where she works as a program associate, in downtown Sacramento, Calif. on Nov. 30, 2018. (Photo by Ashley Hayes-Stone)

There’s still room for improvement on college campuses regarding the treatment of trans students, Harper says, and her experience was no exception. Some of the issues trans students face in school are name changes, misgendering, bathroom usage, increased sexual and physical assault and harassment.

California signed the Gender Recognition Act-SB 179 into law October 2017, which will make it easier for students to change their affirmed name in school documents. Implementation of this law may be affected by the proposed changes to Title IX.

Harper dealt with being called the wrong name — otherwise known as being deadnamed — during her college experience.

In the classroom, transgender students have to navigate strict social norms and are vulnerable to demeaning comments.

Harper says she once had a professor call her out in class to compare hand sizes, which she felt publicly demeaned her and unnecessarily pointed out a physical characteristic typically seen as masculine. She says she also dealt with sexual harassment from male students on campus.

“I can’t lie it’s a rough existence, and [at ARC] it was rough,” Harper says. “I was either getting laughed at or getting objectified by guys like, ‘Oh can you meet me in the bathroom’ … and that’s how most of our community lives.”

Harper says that college campuses are a place where young people, professors, and administrators can learn about being allies and resources to trans people. Creating policies to defend and protect the rights of trans students will send a ripple effect throughout campuses across the country, she adds.

“You put in certain protections for gender identity [like] your gender queer family that’s encompassing transgender folks. You start with policy in terms of name recognition, you make it easier for folks to be recognized how they want to be recognized,” Harper says. “The culture shift starts here [in colleges] systemically, you have to train the professors, the people at the top … then it will trickle down to the students.”

Harper says she thinks another way colleges can help trans students is by making the college experience easier to navigate and making them feel as though they’re able to do and be what they want without limits or restrictions. Mandating classes on gender and sexual identity can be another solution to educate students and improve the college experience for trans students also, she says.

Harper says she believes in being compassionate in terms of interacting with and educating individuals who aren’t necessarily familiar with trans people. However, Harper’s willingness to educate people doesn’t absolve those individuals from taking responsibility of educating themselves and respecting black and trans people in her eyes.

“I’m compassionate and think with my heart even if someone is being ugly towards me … but I’m willing to go that extra step,” Harper says. “I’m OK with people not knowing things and I’m OK with being misgendered … I do want to learn and grow and find a common place, [and] I don’t mind teaching people but also it’s not my job to teach you on how to treat another human being with respect.”

Engaging with trans people in the everyday lives of cisgender people is a way to break down the discrimination and stigmatizing of trans people, according to Harper.

“I also know [cisgender people] haven’t been that exposed to people like me, and I’m a teachable moment for you,” Harper says.

Harper says she’s happy that ARC has made steps to support and provide resources to LGBTQIA+ students with the creation of the Pride Center and the numerous clubs on campus centered around those identities, though she wishes the changes came sooner.

“It’s been a long time coming and it makes me want to be on this campus more. I feel more included, there’s programs that resemble my existence as a human,” Harper says. “That’s beautiful … this should’ve been happening 20 years ago.”

Despite the government’s threats against trans people, Harper says she still has hope and will make it her life’s work to fight for the generation after her to make it a better, more accepting and inclusive world.

“What you young folks are doing is breaking down barriers … that’s what’s different from my generation,” Harper says. “That’s why I appreciate young folks and I’m going to work my entire life to empower young people because they’re my future and they’re going to make it easier for the next ‘Ebony’ and I’m excited.”

Opinion: Students shouldn’t be pressured to pick a major