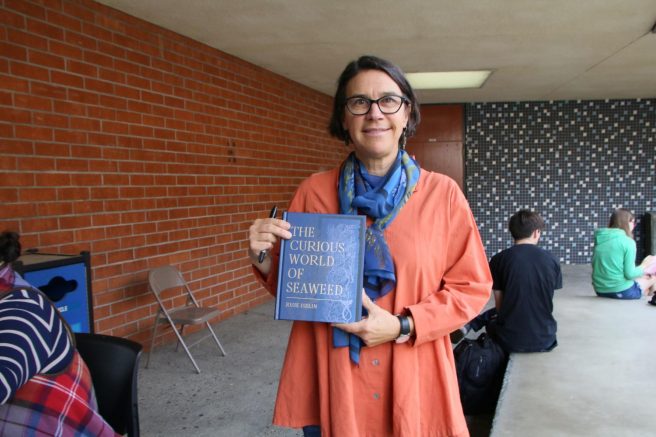 Author Josie Iselin poses with her book “The Curious World of Seaweed” on Nov 12, 2019. (Photo by Marquala Brown)

American River College hosted a reading for “The Curious World of Seaweed” by author Josie Iselin on Nov. 12 in Raef Hall 162. Iselin was invited to share pictures and explain the biodiversity of seaweed to a full audience. She was invited to host the event because of her experience and knowledge in science.

Iselin describes herself as a photographer and author. She currently resides in San Francisco after getting her Bachelor of Arts in Visual and Environmental Studies from Harvard University and a Masters of Fine Arts from the University of San Francisco.

Iselin released her first book “An Ocean Garden: Secret life of Seaweed” in 2014. Her current book “The Curious World of Seaweed” is a follow up with 16 chapters on the biodiversity of seaweed and the three categorized groups of seaweed.

During the reading, Iselin explained her process as walking along California beaches and collecting specimens and then taking them to her home where she uses an Epson scanner to capture the seaweed.

Iselin said because of this, she sometimes has to switch up her process by either leaving the top up or down on the scanner or positioning the seaweed in various ways in order to capture a photo.

Iselin showed many images of her seaweed art that will be featured in her sophomore book and other works of art that were included in her gallery shows, including Seaweed Abstracts and Algal Dreams: New on Old.

In attendance was ARC ecology professor Jennifer Neale who has previously attended presentations by Iselin and says she is interested in intertidal environments and the intersections of art and science.

“I think it is fantastic for our ARC community to bring in folks with a great variety of experiences and viewpoints in a forum where staff, faculty, students and members of the community are able to share the experience together there is not enough of that,” Neale said.

For more information about Josie Iselin or to purchase her book, visit her website at josieiselin.com

This is Marquala Brown’s second semester on the Current and her first as the Social Media Editor. Next semester, Brown hopes to graduate with an associate’s degree and transfer to a four year university.