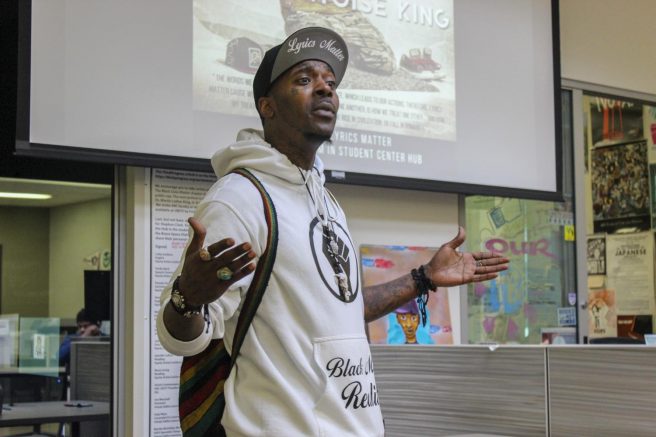 Rapper Aurellius the Saint lectures on the power of words in the Hub at American River College on April 17, 2018. (Photo by Jennah Booth)

Aurellius the Saint, an artist from Washington Park, Illinois, hosted the event to speak on how words matter and the importance of the words people choose when they speak.

Aurellius doesn’t consider himself a rapper, but calls himself a lyrical poet and a vocalist when he rocks with his band. Some of his favorite artists growing up include Black Thought from The Roots, Tupac, Nas, Joey Badass and Al Green.

Aurellius has been doing community work like this for a majority of his life now. He chose to help people and give speeches on what he believes in, and has been to places like Ferguson, Missouri and more. He has also been a part of the former Black Panthers, Black Lives Matter and other activism parties.

“The presentation and overall message is bringing awareness of what’s going on in the community,” the artist said.

Aurellius focused a lot on frequencies and vibrations during his presentation; the way people use words, how they say them, and what they mean.

“Frequencies and vibrations is something I grew up with along with always being a seeker of knowledge,” Aurellius said.

The event also included speakers Dr. Leah Johnson and Rayn Jackson, who both talked on the subject of what words convey.

Jackson works for the Klymaxx Corporation. She spoke about the value of every person and the ability to make people feel positive with an uplift of energy she brings.

She told the crowd that she says things like “I love you” to random strangers to bring the energy back so that they feel better.

“Now I may walk up to a random stranger anywhere and say it. I wasn’t prepared for how it would change my life. Now I’m a believer,” she said.

Jackson speaks at different schools to spread the message of positive energy and the kindness of words.

“I will come out and speak to schools given the opportunity. I am very busy with home and running my company but I think nothing happens by accident so if speaking is a part of my journey then I will embrace that energy and share,” Jackson said.