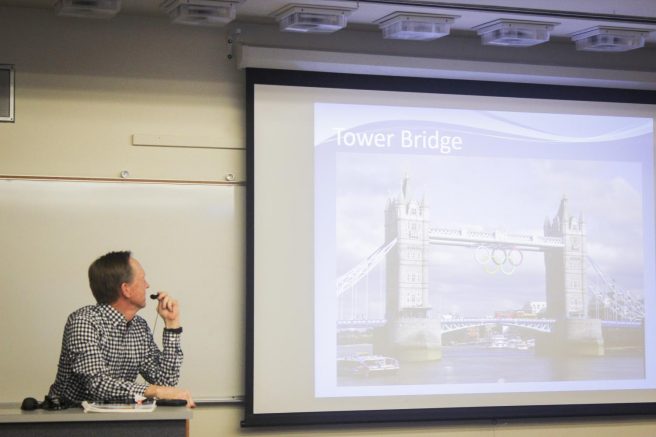 Psychology professor Mark Stewart presents to the audience about studying abroad in London during summer of 2018 at American River College on Feb. 1 in Sacramento, California. (Photo by Alondra Botello)

On Feb. 1, Raef Hall became home to a group of eager students looking to spend a semester abroad in the city of London.

Pictures were displayed on the projector as stories were told about the way the Los Rios Study Abroad Program changed lives and expanded the student’s understanding of the world and of travel.

Psychology Professor Mark Stewart and anthropology/history Professor Kristina Casper-Denman hosted the college hour and answered questions about the cost, housing situations and the itineraries of the two London trips happening this year.

Stewart, who has been teaching at American River College for about 26 years, is the advisor for the study abroad opportunity in London during the summer.

According to Stewart and Casper-Denman, students have an opportunity to earn credits, learn of a new culture and city with professors as well as students from different colleges in the Los Rios district.

Casper-Denman, who has been teaching at the college for about 20 years, is the advisor for the semester-long trip. The fall program is from Sept. 6 to Dec. 7. The cost is $8,595 based on an enrollment of 80 students. This price excludes airfare. The application for this trip is due by June 13.

The major difference between both trips is the cost and the amount of time in London.

Both professors understand that money is often the primary factor why students don’t study abroad during their college years.

“I didn’t have the money to do [study abroad] when I was younger and my parents were not offering,” Stewart says. “But if it is there in someway no one ever regrets spending money.”

Although many students do not have enough money on their own they are often successful fundraising it in different ways. Stewart has seen students ask parents, grandparents, and friends for money and be very successful in the approach. He has even witnessed one student raise about $6,000 by opening a GoFundMe account and posting flyers around campus.

Casper-Denman suggests applying for the ARC scholarships which are open until the beginning of March. Another scholarship she recommends is the congressionally funded Gilman Scholarship which offers students studying abroad up to $5,000.

The study abroad experience offers classes for college credit. The summer program offers a psychology course taught by Stewart and the semester program offers three classes taught by Casper-Denman. Those courses are Physical Anthropology, Introduction to Archaeology and World Prehistory and Magic, Witchcraft, and Religion courses.

What makes London in particular so special for educational and personal development is “the history” Stewart says.

“The opportunity to be there and see things that they have read about in History books or have seen in movies or other media,” he says.

He compared London to New York.

Former student at the El Dorado Center of Folsom Lake College, Barbara Kaines has learned that a study abroad opportunity like this one is something she regrets not doing earlier in her life. “I should have done it years ago. I didn’t realize how cultured England was and how uncultured and unaware of the world I was” Kaines said.

“Wherever they decide to go, whenever they decide to go,” said Casper Denman. “The most important thing is to ask themselves ‘what will I lose if I don’t go,’” when deciding whether or not to give study abroad a chance. She explains how this opportunity not only looks good when transferring or for grad school but it gives a different perspective of the world.

This difference of perspective is a common lesson that both Stewart and Casper-Denman have seen flourish in their students after studying abroad.

She is an advocate for seizing these types of opportunities because in her words they only come once in a lifetime.

“When [students] graduate and have a full-time job, they will not have the chance to…experience something [like] this,” Kurre said. “Whether you realize it or not, this is the most free time of your life, so seize the opportunity! Experience this while you are young! It was hands down the best time of my life.”

Alondra Botello is a second-year student at American River College. This is her first semester writing for the Current. She is working on her associates degree in journalism. Outside of school she can be found singing or creating something new for her personal Instagram. She will be transferring to California State University, Sacramento in the fall.