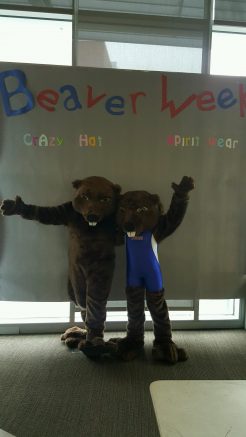 There is a bridge that holds up the American River College spirit, and the builders of that bridge are the gender neutral Bucky Sr. and Bucky Jr.

Bucky Sr.’s story goes back 20 years, beginning with a fire that was survivable.

Bucky Sr. lost its significant other and all the fur on its body as well as its ability to play sports.  After a long  two decade rejuvenation, the mascot decided to come out of hibernation and return to American River College, according to Katarina Bailey,  an employee at the Dusty Baker Center, best friend, and translator for the mammals.

Sr. returned during the fall 2016 semester, and brought life to a younger offspring via the birth of Bucky Jr.

Bucky Jr. is a freshman in college and has the ability to play sports on almost a professional level.

Bucky Sr. and Bucky Jr. never speak a word, according to Bailey,  and are secretive, but reveal their outgoing  personalities during American River College-related events or sports.

Bucky Jr. is well known for his mad dance skills especially if you catch the mascot around the song “The Walker” by Fitz and The Tantrums.

Jr. has a wardrobe almost any college student would wish to have including jerseys and others sports-related swagger.

Bailey tells how it is and how to become such a mascot.

“Usually the person that is chosen to be the mascot has to be a student athlete but also outgoing, fun, and energetic,” she said.

Be the first to comment on "The bridge of beaver spirit"