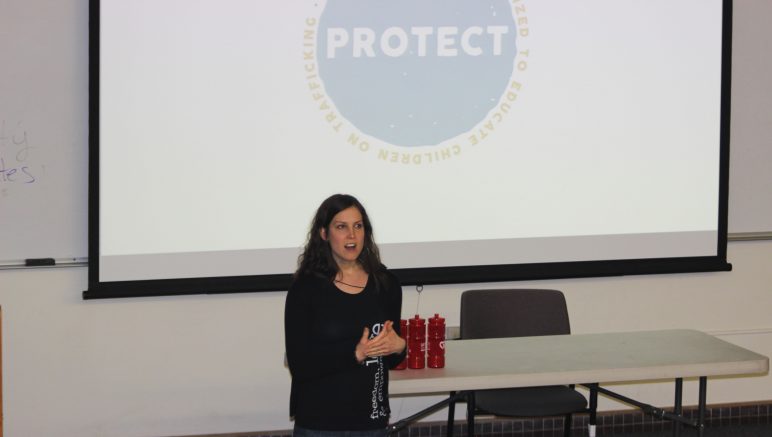 Even with slavery abolished, America still has a slave problem. Today there are currently 21 million slaves in the world, more than ever in recorded history, according to the International Labor Organization. Seven percent of these slaves are from the ‘developed economies,’ North America, Canada, and the European Union.

Three non-profit organizations have banned together to inform and prevent trafficking. 3-Strands Global, Love Never Fails, and Frederick Douglass Family Initiatives have come together to create Protect.org, a coalition trying to educate on how to prevent this crime.

A speaker from 3-Strands Global, Sarah Bond, spoke and educated on the subject on March 30 during the school’s College Hour. UNITE hosted the College Hour.

According to Bond, “3-Strands Global’s” vision is to see a world free from trafficking, and their mission is to “combat trafficking through sustainable employment, education, and engagement initiatives. They’re doing this because “Human Trafficking is not okay,” and “everyone can make a difference,” Bond said.

According to the ILO, human trafficking is a $150 billion dollar industry, with $9.8 billion coming from the U.S. It is the third largest and fastest growing criminal empire.

One-Hundred Thousand people are estimated to be forced into sexual exploitation in the united states, according to ILO. To put that into perspective, that number of people is about what fills up a football field. Bond said that fifty percent of these people are women, and the other half are children.

Bond said the average age of trafficked victims is between 14-15 years old.

According to Bond, most prostitution cases are forced, and “very few people choose it [prostitution],” she said. Some of the time it’s a case of ‘bonded labor,’ which is where the victim owes their trafficker money, and so they are forced by the trafficker into prostitution for a debt that never goes away, or until they’re life is expended.

“This is happening all around us,” Bond said. Three of the major Trafficking cities in California are San Francisco, Los Angeles, and San Diego.

According to 3-Strands Global, some of the signs of trafficking include victims avoiding making eye contact, unwillingness to give name, signs of drug use, few or no personal possessions, missing school, a graphic online profile, physical abuse, and presence of an overly controlling partner. For prevention, they advise to be cautious of social outings, “trust your inner voice,” and always tell others where you are or where you are going.