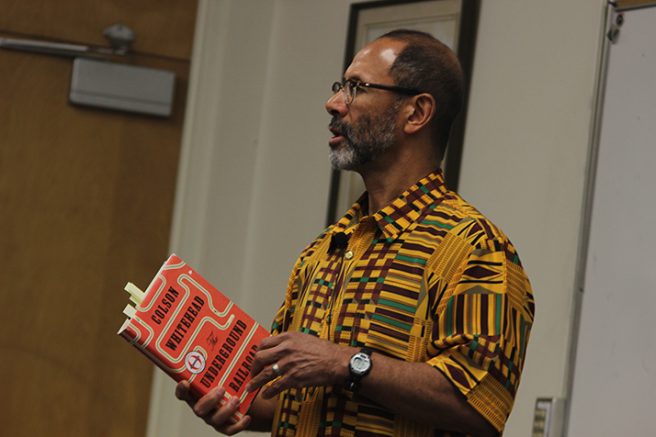 A reading of the New York Times bestselling book, “Underground Railroad” by Colson Whitehead was held for college hour on March 23.

American River College history professor Rudy Pearson lead the lecture, who discussed and analyzed the book for its historical value.

The college hour was hosted by the Honors program at ARC.

According to Pearson, in 1850 there were approximately four million slaves in the U.S. It’s speculated by historians that 100,000 escaped, Pearson said.

While Pearson seemed to enjoy the book, he noted that reading a book of fiction based on history can be tough for a historian because they are always looking for the facts.

He digressed though saying that he was happy that African American history was beginning to gain popularity and he said, “if it takes movies and literature to make history popular then I’m all for it,” and that the “book overall is quite good.”

“Underground Railroad” is the story of two slaves who leave the Georgia plantation where they are enslaved.

The book itself takes the metaphor of the Underground Railroad, which was a series of secret routes and safe houses that slaves used to escape slaveowners, and turns it into a literal railroad with tracks and trains.

Pearson said the the biggest takeaway from the book was the human story behind slavery.

He said that the book takes the statistics out of slavery. Most of the time people just hear the statistics of slavery, and know that slavery is bad without putting themselves in the shoes of the slaves, or feeling how the slaves felt. That’s what this book did, he said.

ARC student and Psychology major, Kyla Lawson, said she enjoyed the lecture. “I thought it was a good reflection of how the history played into the fictional characters.”