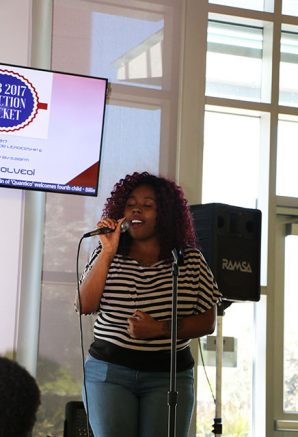 This month of February celebrates the history of black Americans through art, music, poetry and dance.  A “Black History Month Close-Out” showcased a variety of black cultured entertainment at American River College on Feb. 23

Other events included an  “African Regalia,” which showed fabric from African culture, along with a talent show  included singing and rap.

The opening of the event started out with the song “A Change is Gonna Come,” originally sung by Sam Cooke, covered by Cheleysa Oliver.

Oliver said she chose the song because she felt it fit with the theme.

“Usually this goes along with Black History Month, in which black people believe a change is going to come,” Oliver said.

Dante Pelayo, a poet said that he invented his own poetic style called “omnipotique,” an example of Pelayo style was relevant in his piece called “Pizza” had audience members laughing and clapping.

The event also included vendors selling items such as clothing and scented oils.

Frankie Johnson, assistant for the Center for Leadership and Development was the organizer of the event and said that she wanted people to take something away from the events to share with someone else.

“One of the main focuses is the educational aspect of the event,” Johnson said.

Johnson mentioned that she liked the atmosphere that took place and spoke about how the talent show event was organized.

“I looked for outside talent through email first then word of mouth… talent doesn’t have to be Jay-Z just anyone who has the nerve to go up there [to sing].” Johnson said. “With all the things being done here we are trying to teach students it’s not just for black people it’s for everybody.” Johnson said.