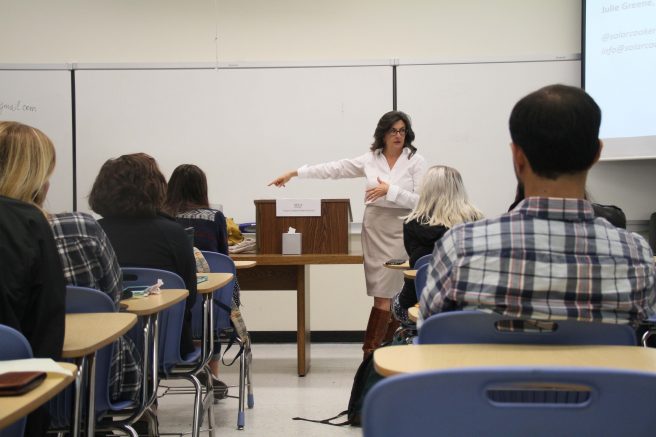 The Model United Nations Club welcomed a guest speaker from Solar Cookers International (SCI) to a crowd of MUN club members on Thursday in Davies Hall 107.

Speaker Julie Greene was there to explain what SCI’s goal is and to inform about solar cookers.

The Model United Nations club participates in mock UN conferences with other clubs from all around the country. In theses conferences, they act how the real UN would in the situation. Currently, they are preparing for a conference where they will act as Japan, Latvia, and Iceland.

Makena Hulme, President of the Model UN Club, said that educating people about what the UN does is an important part of what the club does.

A first year club member, Chloe Craig, said that the best part of the club was “the exposure it gives me into the interworking of other countries.”

SCI is a non-profit organization. According to their website, their mission is to “spread solar thermal cooking technology to benefit people and environments.”

Many people across the world still use fire to cook their food. This is a problem in poorer countries because of the negatives that come with it.

Some of the negatives include being injured from burning, the time commitment of gathering wood and smoke inhalation.

“Household air pollution is the leading cause of death in the world,” said Julie Greene, an executive director for SCI. “Solar cookers take away this danger entirely because there is no smoke involved in the process.”

According to Greene, three million solar cookers have been distributed worldwide so far.

Solar cookers are large reflective dishes that are made of materials that can be found locally in the area they are used. The dish concentrates the energy of the sun to cook the food, which is placed in a black pot.

The solar cookers main function is to cook, but it can also be used to pasteurize or heat water, to dry food and to clean surgical equipment.

In the U.S, a solar cooker costs about $40, and costs about $25 to make. Greene said that the reason SCI charges for their solar cookers is that people will use them more once they have personally invested in it.

If you would like to donate to SCI or learn more about them, you can visit their website at solarcookers.org.

Students protest Trump in front of the Library