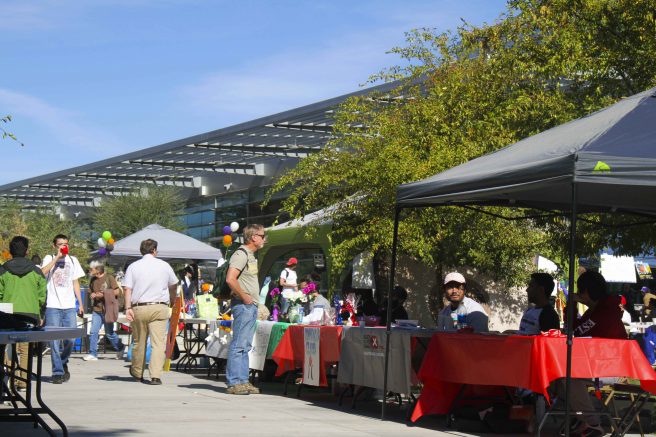 Students gathered near the quad outside the Cafeteria today for the Monster Mash themed Club Day where mummies were wrapped in toilet paper and games with prizes were played.

One of the prizes was a mug that was crafted by Teresa Bergman, president of the Medieval Battle Club.

Fashion Club member Alexandra Musik had commented on her experience from the musical chairs game.

ARC students had voiced what they had liked about the look of this week’s club day.

Madrona said that because it was Halloween it was a great scene to look at.

Lukas Sam-Luc, a friend of Madrona had said the music was a nice touch.

Many different clubs had described their club’s mission as well as their purpose for being on campus.

The Puente Club mission according to member Hector Maldonado, is a youth leadership group.

“Puente is a club to help community as a whole is to empower the youth,” Maldonado said.

Another club, the Model United Nations Club, has existed since 2004 at ARC.

The clubs purpose is to represent a nation to argue for the policies.

“We assume the role of our country and take on their policy international and cultural,” Boyce said.

Boyce was representing Japan this year.