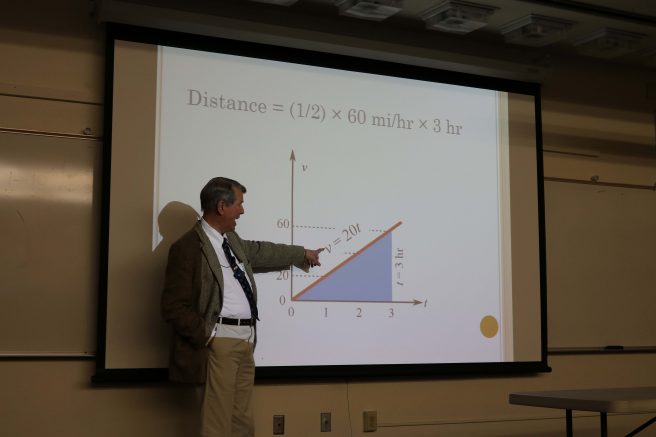 Professor Barcellos gives instruction about the distance with miles and hours at the October 6 College Hour. (Photo by: Cierra Quintana)

Anthony Barcellos, who works as a professor in the American River College mathematics department, gave a presentation during this week’s college hour to get students interested in math.

Amanda Corcoran, an english professor at ARC, introduced Barcellos as her “talented and interested colleague.”

Barcellos began his presentation by introducing the crowd to Galileo and the great work he did for science and mathematics.

The math professor used simple math, such as finding the area of a rectangle or distance equations to show students that they actually are “math geniuses.”

Barcellos said he wishes students were interested in math because we can use math equations to make our lives easier by finding how much gas we need to get from point A to point B or how long it will take to get to our destination.

“I liked the examples he used. He made it really easy to understand Galileo’s plan and his equations,” said ARC student Brenda Mitchell.

Barcellos used several examples to show Galileo’s equations for distance and time. These equations were used to measure “falling from earth.”

The ARC professor used humor and jokes about math to keep the crowd of students and faculty members engaged and the crowd participated throughout the presentation.

“I’ve never really liked math but his use of examples like the ‘falling from earth’ like the hammer and the feather, really helped me understand it all.” said ARC student Danielle Peterson.

The point of Barcellos’ college hour presentation was to teach students that they actually are math geniuses regardless of their feelings about mathematics or their previous grades.

“I liked how (Barcellos) was trying to teach us that we are good at math. The resources to be great at math are right at our fingertips, we just need to do the work to find them,” said ARC student Richard Edwards.

Barcellos provided his students with his personal email and also the web address to his website if they had questions about math.

“Thank you all for listening and being math geniuses with me for 40 minutes,” Barcellos said.

1 Comment on "Professor uses basic math to get students engaged"