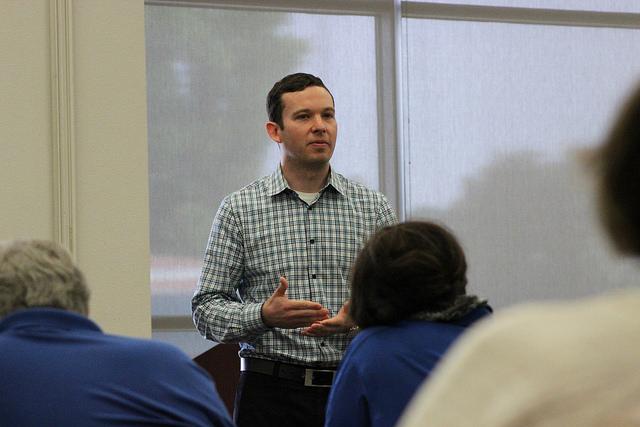 Speaker Bryan Adams recounts his time serving in the US Army and the mental after effects of being a sniper during the Iraq war on May 4. (Photo by Matthew Nobert)

Iraq war veteran and Purple Heart recipient Bryan Adams spoke at American River College on Wednesday, addressing the reality of PTSD and the experiences that he’d brought back with him to the United States after his time in the service.

PTSD, like many mental health issues, isn’t spoken about openly—few people take the first step of even pursuing treatment and attempt to cope with it on their own.

“I can’t tell you how many people have come to me about those feelings of isolation coming back,” Adams said about other veterans he’d spoken with.

Adams’ experience with the war in Iraq began with his first week of deployment, when an explosion that damaged his caravan resulted in fatalities. He recalled seeing one friend cry and the lifeless body of another.

“It was no longer a game,” Adams said. “I remember seeing tanks blow stuff up and infantry running through the streets. … I felt like my life had changed. Like there was a time limit on my life.”

In 2008, Adams’ patrol was ambushed in Tikrit, Iraq and he was shot twice in his left leg and across the back of his hand.

He described the surreal experience of being pulled away for medical treatment.

“I get over there, I’m on a stretcher and the doctors and surgeons are making jokes… they said that they couldn’t believe that I was alive,” he said.

Though Adams recovered and completed his service, he was confronted with new challenges upon returning to the United States; a sense of isolation, a difficulty integrating, and his PTSD.

“I remember being frozen in fear, thinking ‘I can’t believe this is happening again,’” Adams said of his first episode.

He went on to describe what it was like for him to live with the condition.

“I’ll countlessly and painfully go through every scenario. … I’ll think about the people that died,” Adams said.

“It’s a slideshow going through my mind with pictures, music,” Adams said..

And to cope with his struggle, he turned to alcohol, saying that “(I) just started getting drunk.”

Adams’ experience isn’t unique—20% of veterans of service suffer from mental health issues, and he said that the most important thing is for them to have access to people that they can relate to and that can help them.

Multiple veterans were in attendance, including Daniel Avegalio, the coordinator for ARC’s Veteran’s Resource Center and a Marine Corps veteran.

ARC’s VRC offers the sorts of services that Adams utilized to improve his own mental health, such as therapy and the opportunity to talk with other veterans.

“We’re basically the first stop for any veteran coming to campus,” Avegalio said of the VRC. “We want to (reach out) to them… and make sure that we’re helping with their transition, which is a struggle for many of them.”

Avegalio said that the discussion of mental health has begun to improve and that “(ARC’s staff and professors) are very supportive,” and that they reach out to him now.

While Adams was talking with veterans after sharing his story, Asher Hamilton, an intern with UNITE, discussed the significance of having conversations mental health on campus.

Hamilton mentioned the three recently reported suicides of ARC students as one of the main causes for concern.

Slavery is a bigger problem than ever