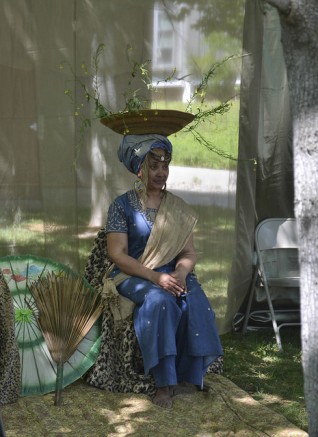 Shawarma Thrower poses as mother earth for students to draw during the Earth Day celebration on April 19. (photo by Sharriyona Platt)

American River College celebrated Earth Day with a two day celebration on April 19 to 20 with visits from environmental groups and organizations, artwork displays by students, vendors and a live band.

The event was put on by the Center for Leadership and Development, with student personnel assistant Frankie Johnson as the coordinator.

“The Earth Day planning committee worked really hard to put this event together,” Johnson said. “The first day was only ARC involvement, and today outside community members joined us in the celebration.”

Various organizations took part in the event, including California Sunlight, which was advertising and selling its Solar Balloon Cooker.

Representative Rick Noss said, “(The Solar Balloon Cooker) was released one year ago during earth week and we were selling them here at last year’s celebration,” Noss said. “It uses only clean and sustainable energy from the sun.”

“You can use them to boil water in 15 minutes, make hot dogs, bacon, soups and stews. … I’m making biscuits right now,” he added.

There was an art display that ARC students made as part of a competition by the art department for the new UpCycled trash bins, which will be placed around campus as part of “Sustainability at ARC.” 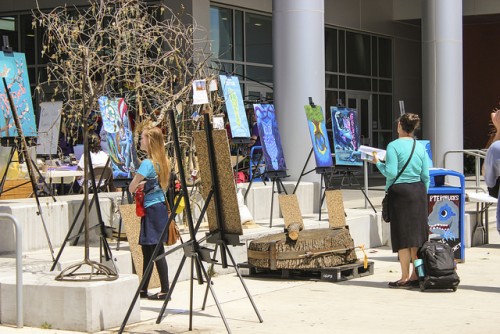 Art panels made from old trash cans by art department students were displayed during the Earth Day celebration on April 19 and 20. (Photo By itzin Alpizar).

“All the old trash bins will be replaced with the new UpCycled ones,” Earth Day planning committee member Cecilia Baldwin said.

Members of the art club and other students participated in the competition, and art club member Frankie Vanity took first place.

There was also a “tree of purpose” on display where students could write their UpCycle ideas and hang them on the tree.

One student, Maurina Robinson, expressed her feelings toward ARC actually celebrating Earth Day, because she hadn’t experienced that at other schools she attended.

“I think the art is really well done and I love the tree of purpose,” she added.
The event also included several vendors selling items and a live performance by the band Descargo Tropical.

ARC team worked at NASA facility for ‘near space’ project

Brave space tackles representation and racism in the media