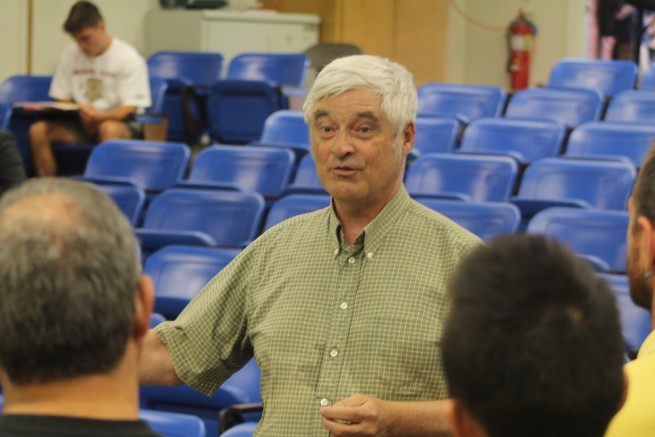 Steve Running, who earned his doctorate in forest ecophysiology, answers questions from students and faculty following a lecture on the effects on climate change and new developments in energy in Raef Hall at American River College on April 21, 2016. Running was part of the Intergovernmental Panel on Climate Change, which was awarded a Nobel Peace Prize in 2007. (Photo by Mack Ervin III)

“If we wreck the Earth we can’t simply off load to Mars. It will not work. So, we have to save this planet,” said Steve Running, who was a board member of the Intergovernmental Panel on Climate Change (IPCC) when it was awarded the Nobel Peace Prize along with former Vice President Al Gore in 2007.

In front of a packed lecture hall, Running spoke to the American River College community on the effects of climate change and the growing opportunities in the energy field as a part of the college’s three-day celebration of Earth Day.

In regards to climate change, Running talked about the damage coal is having on the environment and how the world as a whole needs to make a switch to energy sources like electricity and natural gas.

Although there has been a push for natural gases to replace fossil fuels, Running said that waste caused by flaring at natural gas processing plants is proving detrimental to the switch, unnecessarily wasting $100 million a month.

“These are our natural resources that they’re just blowing out into the sky because they’re too lazy and in too big of a hurry to collect and sell it,” Running said. “As a basic citizen that just pisses me off. Why do we let them get away with this?”

A big focus of Running’s presentation was his vision of job opportunities in the future. He said that this topic is what seemed to interest students the most, so he decided to open all his talks with the question “what should I major in?”. 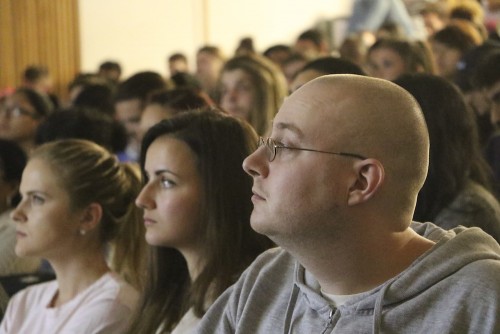 American River College student James Puppolo (right) sits in a packed Raef Hall on April 21, 2016 to listen to lecture from Steve Running on the effects of climate change and career opportunities in the STEM field. Running was a board member of the Intergovernmental Panel on Climate Change (IPCC) what it was awarded the Nobel Peace Prize, along with former Vice President Al Gore in 2007. (Photo by Jordan Schauberger)

Near the end of his talk, Running said that he thinks the ultimate job prospect is probably in electrical engineering.

“I’m just talking about electricity for everything and I’ve seen that the currency of the future more and more is going to be electricity,” Running said. “They’ll use it everywhere and not even in ways we use it now, so if you’re in (electrical engineering), you’ve got it made as long as you pass your final.”

American River College chemistry professor Linda Zarzana, who was responsible for getting Running to speak at ARC, said that her one hope for the lecture was that students had a new idea of what careers were available for them in the science, technology, engineering and mathematics (STEM) field.

“The best part was when he talked about where you go with your major,” Zarzana said. “Where can you go to make our world a better world for everyone? That’s why I thought he’d be a good speaker because people tend to fixate on one major without thinking long term … he brought in problems that are happening right now and existing solutions but in reality we’re going to have to look at future solutions.”

Running agreed with Zarzana and said he hopes students took away that there are a plethora of new job opportunities bubbling up.

“(There are) things that didn’t even exist before that are going to take humanity to the next century, so if you can major in the right thing, get the right education and work to the right area there’s just tremendous new opportunity,” Running said. “We look at the the fossil fuel industry and everything’s falling apart. Well, as it’s falling apart there’s a whole other part of the economy that’s revving up.” 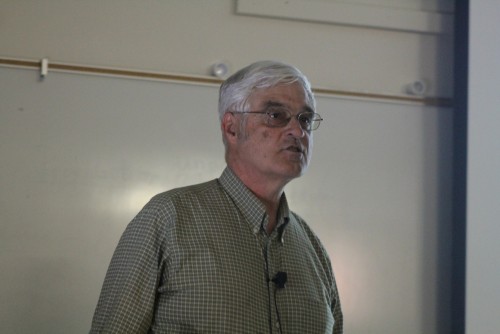 Steve Running, who received a doctorate in forest ecophysiology speaking during a lecture on the effects on climate change and new energy developments in Raef Hall at American River College on April 21, 2016. Running was a board member of the Intergovernmental Panel on Climate Change (IPCC) what it was awarded the Nobel Peace Prize, along with former Vice President Al Gore in 2007. (Photo by Mack Ervin III)

Running and Zarzana had a unique relationship before Running even agreed to come to ARC, because Running’s daughter and Zarzana’s son are married.

Running even said that it was “family inside job” and that he’d spent the previous night at Zarzana’s house.

ARC student James Puppolo said that it was cool to hear a lot of the stuff he’s learned in school reiterated by someone who’s had success in a STEM job.

“(My biggest takeaway) was probably at the end when he was talking about how we can’t go to another planet,” Puppolo said. “I liked more of the focus on electric cars and why not buying one today instead of waiting until is even more of an issue.”

Running concluded his presentation with a picture of Earth from 1 billion kilometers away and said that in order to have a better future there has to action happening right now.

“The fact is, everything we’re talking about will make a better world in numerous ways on top of fixing climate change,” Running said. “So, we would just be fools to not do it and it’s your generation that has to make it happen because mine is too old and tired and likes to drive their SUVs too much.”