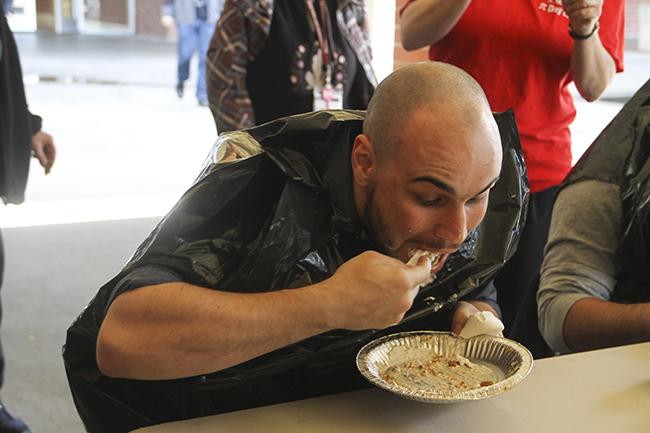 Students and faculty gathered in the Liberal Arts area near Davies Hall to participate in the event.

“It’s important to discuss with students what Pi Day means to us, and that’s what today is about,” Hollenbeck said. “We want students to see that math is everywhere, not just in the classroom.”

Students submitted artwork which was put on display for participants and passersby to vote on.

The gown featured the Pi symbol on the front, 3.14 on the veil and the word Pi on the bouquet.

Abraham and her 12 year old brother Tanishq are the youngest students to ever attend ARC. Tanishq graduated last year with 3 associate degrees.

“This is for the math club,” Fleman said before the contest began.

Winners received tumbler cups, meal vouchers, t-shirts and a puzzle as their prizes.

Owens expressed her appreciation to everyone who participated in the event and deemed it a success.

“We had a great turn out,” Owens said. “The art pieces were great and the pie eating contest was really exciting.”

“I look forward to next year,” Owens said.

Be the first to comment on "ARC celebrates Pi Day 2016"