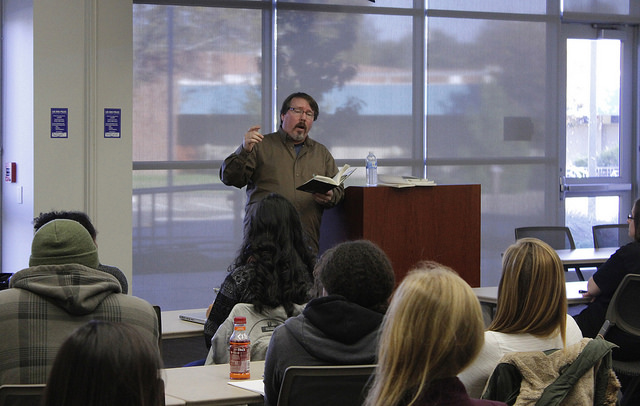 Poet and author Brian Turner reads his poetry to ARC students during his poetry reading in the Student Center Community Rooms on Nov. 12th. Turner is an award winning poet and is also a U.S. Army veteran. (Photo by Matthew Nobert)

U.S. Army veteran and award-winning poet Brian Turner read from his book “My Life as a Foreign Country” on Thursday in the Student Center at American River College.

In 2003, the Fresno State and University of Oregon alum was a sergeant for the Third Stryker Brigade Combat Team of the Second Infantry Division during the Iraq War.

Turner’s earlier work was much different in its message than what he was working on during his time in the military.

“My earlier poems are much more interested in music,” said Turner. “I would apply that music to what I was focusing on.”

Turner said that his family was a large influence in his decision to join the military.

“I came from a family of enlisted and was raised to work my way up,” said Turner.

During the reading, Turner took the time to answer any questions students had, give advice on how writers can improve their skills and discussed what it was like to be a published poet.

Some of the attendees worked at ARC’s Veteran Resource Center.

“He (Turner) came and had lunch with the veterans and I wanted to come and see what he had written because I haven’t heard his writing before, and I was interested in how he wrote about his time in the military,” said Jacob Murray, who currently works at the VRC and is a U.S. Army veteran who served from 1999-2001 as a combat engineer in South Korea and at Fort Lewis in Washington.

However, there were a handful of writers and poets who went to the reading to find ways to improve their writing skills and get inspiration for their own work.

“I want to be a writer, so I came here to get some tips from a published writer and I’m also working on a memoir on my brothers death,” ARC student Daniel McDonald said.

Turner is currently working on a collaboration with the Dutch band Roel Vetrov and the Retro Legion for his next work. He is also releasing a collection of essays.

Be the first to comment on "U.S. Army veteran and poet visits ARC"