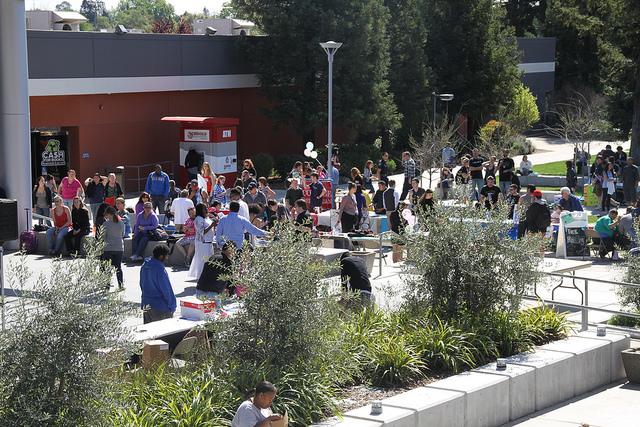 File Photo: Club Day event taken March 20th, 2014. Medieval Club is just one of the clubs that will be present at Club day themed "Let The Games Begin!" on Thursday Sept. 24.

Let the games begin! Says the theme for this semester’s Club Day scheduled for Thursday.

Club Day, put on by the Clubs and Events Board (CAEB), is a chance for students to see and learn more about the clubs on campus.

“I hope to give all the clubs on campus an opportunity to rub shoulders and recruit members,” said President Nicholson. “It’s going to be a day of games and music and, hopefully, a chance for clubs to show themselves off.”

Club Day has been a huge success in the past and many clubs see this as their biggest form of advocacy.

“We’ll be there fighting,” said Marcus Bergman, representative of the Medieval Fight Club. “Everyone is welcome to join and play.”

Previous Club Days have seen themes such as “Candyland” and “Epic Love” and this semester’s theme of “Let the games begin” ties right into a club contest that will be going on throughout the event.

The contest will have clubs creating their own “board” games for students attending Club Day to play.

“The idea of this is to design your own table like a game,” said Nicholson. “People who are in student government or who are just walking around can play.”

The club with the best game table will receive $30.

During its most recent meeting, CAEB appointed a contest committee that will consist of CAEB board members Laurie Jones and James Cortwight as well as club representatives Jaimie Braaten and Justice Ebeling.

“None of the clubs competing will be on the committee,” said CAEB Vice President Mary Stedman. “We want to keep this as fair as possible.”

The CAEB board has several exciting “surprises” planned for the event, according to Nicholson.

“We’re building giant tetris blocks and I heard there might even be a giant transformer on campus,” said an exuberant Nicholson.

Club Day will start at 10 a.m. Thursday and will run into the afternoon until 1 p.m.

ASB begins the semester with only four members