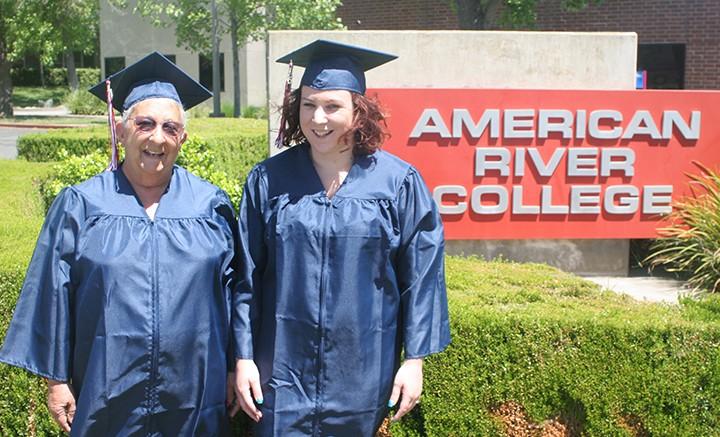 When Pat Brown and Kayla Childers walk together at graduation at the end of this semester, it will mark the ending of a three-year period where the two, grandmother and granddaughter, spent every day at school together.

For Childers, who first began taking classes at American River College in 2011, driving to school together and spending breaks hanging out with her grandmother was “probably one of the coolest things ever,” but it was also inspiring.

“She works so hard on everything she does that it made me want to work harder,” said Childers, a math major who has already begun taking classes at the California State University at Sacramento.

“Sometimes she was a little bit cooler than me and had more friends.”

Brown said that most of her friends at ARC call her grandma because that’s how her granddaughter refers to her at all times.

Brown’s husband and Childers’ grandfather, Dean Brown, passed away in 2011, after a four-year period of health issues. It was some time after that that Brown, who had worked at WalMart for decades, told her granddaughter, who was newly enrolled at ARC, she wanted to go back to school.

Brown, who raised Childers along with Dean, said that her granddaughter was especially close with Dean, and “broke down” when she found out he had died.

“She was in Disneyland with her dance team when he passed, because he wouldn’t let her stay, even though we knew it was close,” said Brown.

“She went down there, and we had made a pact that if he passed away while she was gone, I wouldn’t tell her. I met her at the bus and had to tell her.”

Childers said learning to take care of themselves and each other was a transition, but being together at school brought them closer, adding that they communicate in a way that is unlike any other grandmother and granddaughter relationship she has seen.

Now, Childers works with a cleaning company to help pay the bills, and is determined to take care of her grandmother the way she took care of everyone else around her.

“She took care of so many people all of her life,” she said. “It’s my turn to take care of her now. If that means I have to go to school and work and bust my ass, that’s fine.”

Childers wants to be a middle school math teacher, explaining that it’s an age where she feels children can still be grasped and engaged.

“It was then that everything clicked with me,” said Childers. “I feel like if it clicks for you, you have an obligation to help other people click onto it as well.”

Going to school without Brown has been a process for Childers, who said the first two weeks at Sacramento State were especially difficult, and included a lot of phone calls between classes.

For Brown, who is finishing her time at ARC with an associate degree in social sciences, the next step is online classes with Phoenix University, with the ultimate goal being to get her master’s degree in psychology so that she can eventually volunteer as a counselor for hospice care, because “they were really good to me when my husband was sick and through his death.

Childers believes that kind of urge to care for others is emblematic of her grandmother’s personality.

Be the first to comment on "Granddaughter and grandmother graduate together"