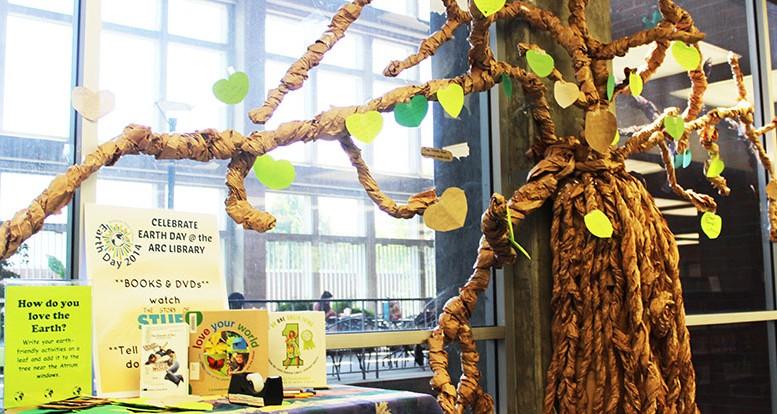 American River College celebrates Earth Day with, among many other things, a paper mache tree located in the Learning Resource Center, for students to write down what they are doing to be friendly to the earth and taping them to the said tree. Outside the LRC were many activities for students with food, music and various booths encouraging conscious efforts to help out the environment.

A previous version of this story falsely stated that Earth day began in 1990. This story was also updated to correct the spelling of Omba Kipuke’s name.

Earth day was first started in April 22, 1970 and was celebrated today at American River College.

Several different booths were lined up in the quad outside the library to celebrate Earth Day.

The event was helped planned by the Eco Club, which has been present on campus for about four years.

“We were on the planning committee with the Student Leadership Development Center,” said club member Gabby Macias.

At each of the various booths were tickets that students could take over to the Eco Club and enter a raffle. Prizes for the raffles were field guide books.

The Eco Club was also selling T-shirts for eight dollars and totes for six dollars. All proceeds go to the the restoration of Kohler Creek right on campus which is done by the Eco Club.

At the beginning of the day, Omba Kipuke, the outgoing Los Rios student trustee, could be seen playing the piano for live entertainment. Aeromark was also present to serve food to students.

The menu included a BBQ chicken meal with students choice of potato salad or corn on the cob with baked beans and garlic bread for seven dollars. Students could also purchase soda or bottled water for a dollar, a cookie for a $1.49  and fruit with yogurt for $1.99.

The event also had a panel discussion about environmental conservation that students could watch to take a break from visiting the different booths.

Also present at the day’s event was “Grow Water.” The co-founder of grow water, Chris Lopez, was talking to students about water conservation.

Lopez prefers to keep water conservation at home and was not in favor of actor William Shatner’s Kickstarter program, which involves piping water from Washington state all the way to California for relief of the drought.

“I think there are much better smaller scale ways of getting a better bang for the buck so to speak than putting in a new pipeline and stealing somebody else’s water,” said Lopez.

“Putting water back in the soil as opposed to letting it run off and pollute our waterways is one way to help, so bringing back our ground water table by slowing and spreading and sinking that water not paving, piping and polluting it and reusing grey water to grow resources so water that is typically seen as a waste can be turned into a resource,” said Lopez.

Campus Pulse: How do you balance school and work?

Be the first to comment on "Earth day celebrated at ARC"