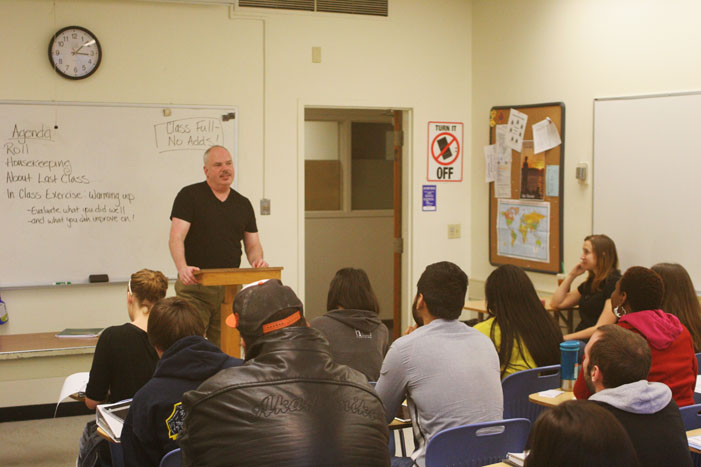 Speech professor David Austin’s path to American River College has included bullying, living on the streets of Los Angeles, and working at Disneyland.

“When I worked for Citrus College, I worked as a hired choreographer who worked with their music department,” said Austin. “Disney hires out entertainment and then that entertainment goes to Disneyland and performs there.”

Austin also choreographed performances at Disney World, in the Bahamas and Jamaica, and on Carnival and Norwegian cruise lines.

While Austin said “it’s way less exciting than it seems,” he thinks the experience helped his self-confidence as an instructor.

“Having the opportunity to teach dance at Citrus College where they then went on tour in different situations, that was really my first opportunity of knowing I could actually teach,” he said.

Paul Duax, a speech professor at ARC, said he is impressed with Austin.

“He’s the new hot shot teacher on campus,” said Duax. “We were looking for a teacher and clearly he impressed us because he was so earnest. We liked his energy, his teaching, his enthusiasm. He has a lot of diverse teaching experiences.”

Duax said that Austin could be a good mentor to students.

“If they (students) don’t like me or they don’t like (Alisa) Shubb for whatever reasons, they can turn to him as an ally or as a mentor,” said Duax.

Austin is not the only member of his family to be a teacher. His father, Wayne, was chair of the speech department at De Anza College until 1991.

“My family didn’t have a lot of money, so my daycare was to actually sit in on his classes before and after school,” said Austin. “I remember thinking to myself that my dad was amazing, but that that was nothing I ever wanted to do.”

Austin, who said he was bullied as a child, ran away from home as a teenager after his house was vandalized.

“I ran away to Los Angeles – I had lived in the Bay Area – where I lived on the streets. That experience molded me significantly, not only in understanding that students come from different backgrounds and to celebrate those differences in the classroom, but also not having a picturesque life – not having everything given to me, everything handed to me,” said Austin.

Austin said he wants his classroom to be open to appreciating diversity among students.

“In my class, there’s one assignment in particular, a storytelling assignment in which they have to tell about themselves. What makes you unique? What makes you different? In celebrating those differences they learn far more from each other than they do from me as a professor,” said Austin.

Cruz Martinez, a student of Austin’s, said that Austin tries to get students to open up in the class.

“In our speeches, he usually wants us to talk about our opinions and perspectives on life or the topic we are presenting,” said Martinez. “The first speech we gave was essentially a two to three minute speech on ourselves. It was about our background, our culture, or how we were raised. So I think it’s safe to say he encourages students to share about themselves.”

Austin came home from Los Angeles and went to college, graduating from CSU Los Angeles with a degree in speech.

He has worked at several colleges, including Citrus College in Los Angeles County, which gave him the opportunity to help with shows at Disneyland.

While initially not thinking he would end up in the same occupation as his father, he now says he tries to “channel (his) dad” when he teaches his classes.

Austin says he applied to American River College because it was near where his parents lived before he was born, and that he is very impressed with the school.

“My parents lived around the corner back when it was a technical school,” said Austin. “Even the first day here, I had students tell me they loved their professors, the culinary school is good here, nothing negative about the school.”