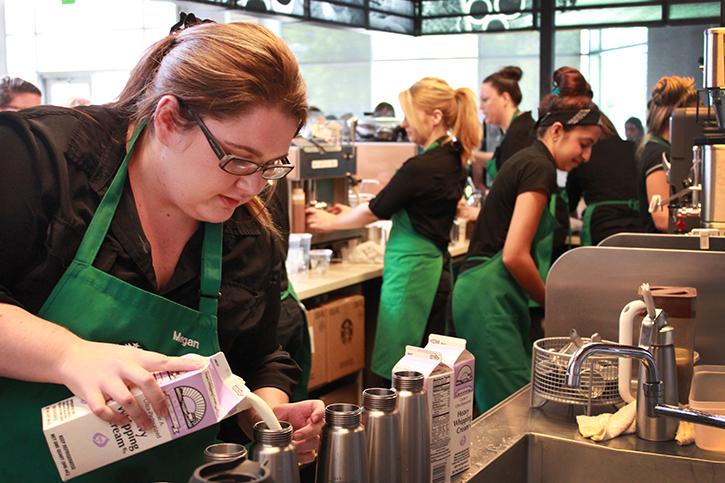 Starbucks barista Megan Doering, 24, quickly fills canisters with whipping cream to accommodate the intimidatingly long line of customers waiting to order their drinks. Doering has worked at the American River College campus Starbucks for two years and says that it is busier than the others she has worked at. (Photo by Emily Rabasto)

In a college of more than 35,000 students, Starbucks is arguably the most popular food and drink spot at American River College. The wait of over 15 minutes at the small campus coffee shop presents students with a decision of which is more important: Being on time to class or getting your fix?

The potential wait in line at Starbucks can delay a student’s day for up to what equals a full class period over a week’s time.

Some students take the risk of being late to class, favoring their hand-made beverages over their academics.

Some students admit that waiting at Starbucks has made them late for class or miss their class entirely.

“I have ended up being about three, four, five minutes late because I’ve been waiting for Starbucks and the line has come to the end,” engineering major Kevin Staebler said. “It’s like if you’re playing poker. They call it ‘pot committed’, where you’ve already sunk too much money into it that you’ve gotta see the end of it. You can’t just fold your hand now.”

During the first week of classes, Starbucks worker Megan Doering, 24, was one of nine employees, including three trainees, scrambling to move the seemingly stagnant line of customers along.

Doering has been working for Starbucks for four years and at the ARC location for two.

She says that working at a college campus location can get hectic, but she enjoys it because it keeps her and the staff busy especially when training three new workers.

Although the staff works hard to do their best to accommodate the hurds of students hoping to get their Starbucks fix, the problem lies with students who prioritize their morning beverages over their attendance in class.

Criminal justice major Catherine Sherrill, 19, usually waits for a long line to die down before standing in line to order her Starbucks.

“Some teachers might be OK with you walking into class a little late, but if you’re extremely late just for a coffee, I don’t think it’s worth it,” Sherrill said.

“If you’re missing class for waiting in line for Starbucks, it’s never good.”

Time management is an important factor in a college student’s educational pursuits.

Choosing to miss or be late to class due to waiting for Starbucks can be seen as irresponsible by many college instructors, therefore students might want to reschedule their coffee breaks in order to put their education first.