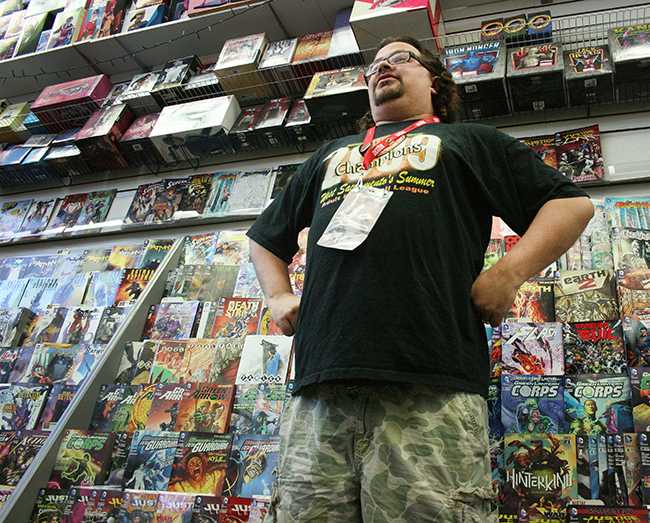 Comic books have seen an upswing in popularity, largely in part to their silver screen counterparts. A1 Comics employee Jared Rudy stands by some of his favorite comics. (Photo by Alisha Kirby)

By Alisha Kirby and Brandon Nelson

The joke’s on you, cool kids: Your favorite macho hero originated from comic books. “Marvel’s The Avengers,” “The Dark Knight” trilogy, “The Walking Dead” and the “Iron Man” trilogy all played a role in bringing what was once considered a “nerdy hobby” to the masses. Much of that has to do with these titles’ recent film and television adaptations.

It’s not just comics on the silver screen gaining popularity. “‘The Walking Dead’ has done very, very well,” said Jared Rudy, a business and marketing major who is also the back issue manager and inventory control manager at A1 Comics.

“‘The Walking Dead’ has been a comic for ten years now…the TV series has helped to make it a very valuable book,” Rudy said. “The first issue sells for between 500 and 1000 dollars.”

Part of the series’ popularity can be attributed to positive word of mouth.

“My friend got me into (“The Walking Dead”),” said ARC student Michaela Cushman. “She is a total fan girl. I read them a little bit last year, but I really got into the series because of Daryl Dixon (played by Norman Reedus).”

Merchandise in all forms has been created to generate more cash for “The Walking Dead,” including your usual shirts, action figures and stickers, but also statues, board games, belts and life-size cutouts of the characters. The comics are sold just about everywhere, including American River College’s Beaver Book Store, and according to Hollywood Reporter, the AMC adaptation has “dethroned ‘High School Musical’s’ ratings record.”

For many students, seeing the films or television shows are their first experiences with the comic book world, and the films don’t always tell the full-story. “The ‘Spiderman’ films, (both) one and two are good,” said Rudy, “but (they’re) completely different. A person can watch a ‘Spiderman’ film and not read the comic to understand it.”

However, not every adaptation is going about it the wrong way.

“Watchmen was panel-for-panel, a perfect adaptation,” said Rudy. “The only thing missing was because of time restraint, but that’s a rare example of a film done right.”

Whether students are die-hard comic fans or just enjoy the stories portrayed upon the screen, this wave of popularity stems from a culture of art and creativity that is making its way back into the mainstream.