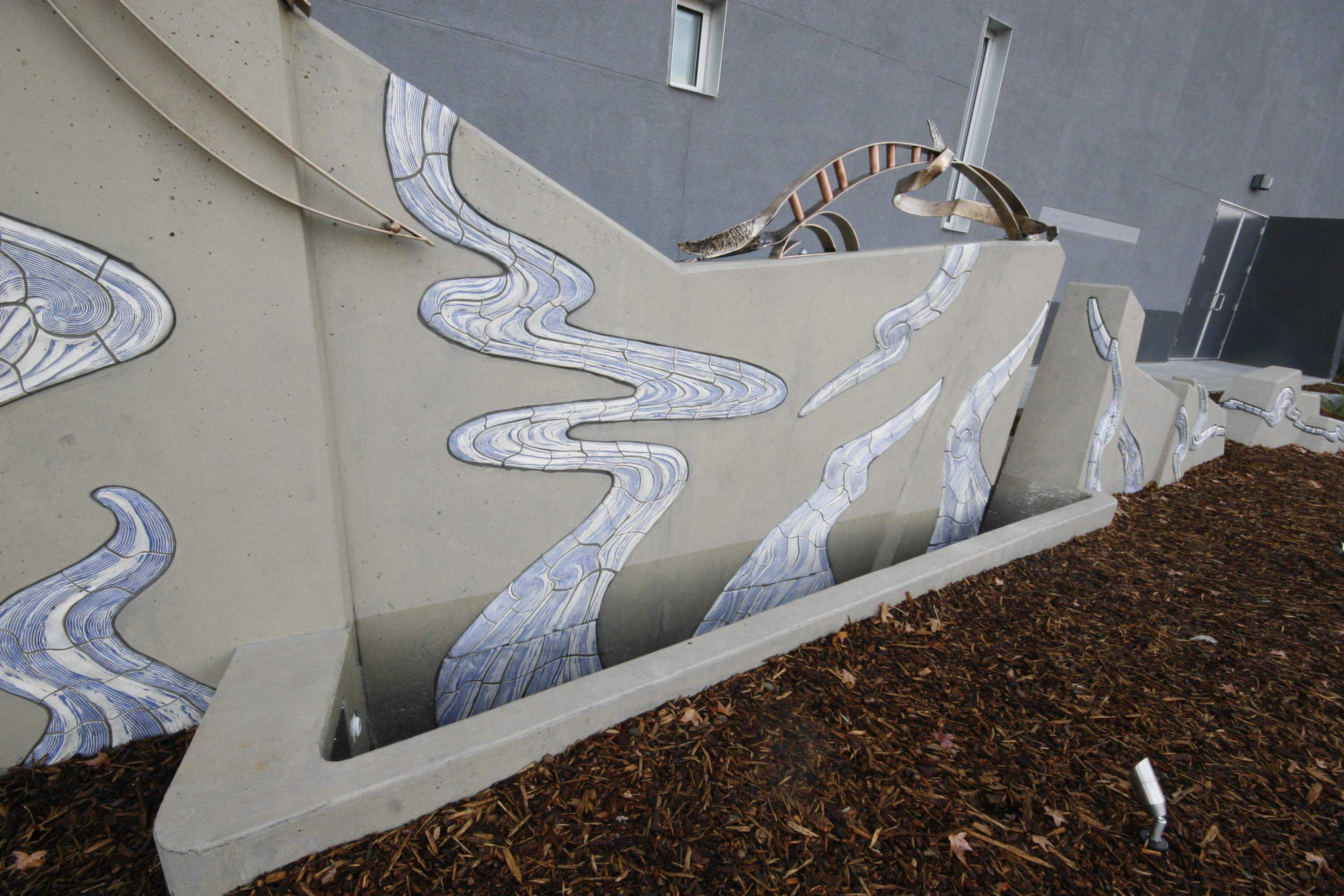 The new water fountain outside of the arts and theater building will be completed by the end of the fall semester. (Photo by Bryce Fraser)

It’s more than just a fountain.

According to its co-creator, it’s a work of art.

A new water installation, located in front of the arts and theater building on the northwest side of campus, is nearing completion. Made from eight separate, asymmetrical pieces of concrete, it features swirling blue tiles on both sides of the back splash. In addition, three pieces of welded bronze spread over the top of it and 10 lights have been installed to illuminate it at night.

Sam Tubiolo and Laura Parker, ARC art professors, started the conceptual work on the piece in 2008 to “design an illustration for the front of the building,” said Parker. “We worked collaboratively to create an environment which we have titled ‘The Confluence of the Arts.’”

According to Parker, Tubiolo was in charge of designing the swirling ceramic tiles, which visibly represent the flowing American River on the other side of the campus.

The bronze work along the top of the artwork might be a little harder to place at first glance, however.

“The inspiration for the bronze-work came from the arm gestures of a conductor directing music,” said Parker, who spent time with Dr. David Newham, an ARC professor, to conceptualize the vision she had.

“Newham actually held lights in his hands while he was conducting in a dark room while (our photographer shot) his movements,” she said.

Workers started on the construction early this fall semester by pulling out the bushes, extracting the trees, and mulching the dirt between the arts building and parking lot A on the corner of College Oak Drive and Myrtle Avenue. Then came the digging to lay the foundation for the miscellaneous shapes of concrete.

Initial student reaction to the fountain has been largely positive. Alex McLean, 24, a psychology major, said he thinks it is a great addition to campus.

“It’s very welcoming,” McLean said. “It draws you into the building.”

Mark Sauseda, 22, a commercial music and recordings major, offered a different perspective. He said he likes the fountain, but thinks the art and theater building behind it “needs more work,” citing its drab colors.

The fountain is expected be complete by the end of the fall semester, with a formal dedication planned for the spring, Parker said.

St-st-stage fright; How I overcame the anxieties of speaking in public