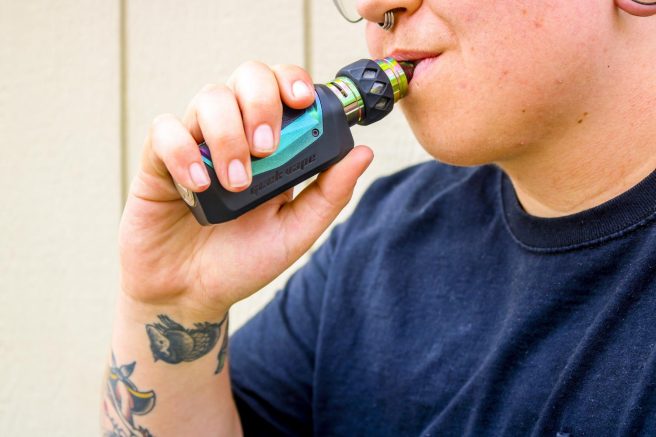 As of Sept. 10, there have been at least 478 confirmed cases of breathing related illnesses linked to vaping in 25 states, including California, and the death count has risen to six. (Photo illustration by Ariel Caspar)

An alarming trend has caught my attention on and off campus recently: e-cigarettes and vaping.

It is astonishing to me how the use of e-cigarettes and vaping has risen in popularity over the years. I understand that it was originally a way to help long term smokers transition into using a less adverse substance, so users would not develop serious conditions such as cancer.

What e-cigarettes were not supposed to do was rake in an entire new generation and introduce them to a dangerous habit that could lead to addiction and serious health issues. What seemed harmless, is now evolving into a massive epidemic across the country, according to the New York Times.

Teenagers and young adults in several states are experiencing severe shortness of breath, vomiting, diarrhea, fever and fatigue, and according to health officials, these cases have been linked to vaping and e-cigarette use.

E-cigarette and vaping companies need to be held responsible for how their products are being used. These products are causing a myriad of issues for various age groups. Vaping companies should be demonized for creating products that are harming and killing people.

According to NBC News, as of Sept. 10, there have been at least 478 confirmed cases of breathing related illnesses linked to vaping in 25 states, including California.

The death count has risen to six, and that number may continue to climb. Deaths have been reported in Illinois, Indiana, Oregon, Minnesota and California.

Most patients experience flu-like symptoms, but more severe cases have put individuals in the intensive care unit or on ventilators for weeks on end, the Times reported.

Experts and health officials are still investigating the specific cause of these widespread, similar cases, according to the Times. Health officials suggest that these illnesses may be related to inhaling leftover droplets of oil when the liquid cools down, which can result in breathing problems, lung inflammation and even death if done in excess.

Other experts such as Scott Gottlieb, a physician and former commissioner of the Food and Drug Administration, reported to the Times that it could be new ingredients or products on the market by illegal manufacturers such as new flavors or a new way to emulsify THC.

In addition, users are now substituting their own ingredients and mixtures, making it more difficult for regulators and scientists to zero in on one specific product that may be responsible for these mysterious illnesses, according to the Times.

According to the Wall Street Journal, federal health officials are now warning the public to not buy e-cigarette or vaping products off the streets and to refrain from modifying any products they already own until the investigation is complete.

This information not only makes me sad, but frustrated with how accessible vaping products are. Since vaping has become a DIY recreational activity, it is now easier for users to buy illegal products. Users are also adding THC to vaping liquids. It’s so easy, a 15-year-old can do it!

My cousin had not even graduated from high school when he started vaping. Now he’s 20 years old, complaining of breathing issues and constant soreness in his throat that prevents him from singing well. He had never even considered that it could be the vaping that was causing him so much trouble. Once he did the math, he started to organize a plan to quit — easier said than done.

Vaping products were never designed for this young age group, yet vaping companies appeal to young people so strongly with the fun, enticing flavors, the small, very easy-to-hide sizes (thanks, Juul) and the mature, grown-up vibe it gives off to young, immature teens and young adults.

Increasingly, vaping companies are having to answer for their products.

According to CBS News, the FDA said Juul Labs lied about their products being a safer alternative to smoking. Last week, Michigan became the first state to ban the sales of flavored e-cigarette products, and San Francisco recently followed suit, banning vaping products that have not been approved by the FDA, CBS reported.

As of Sep. 11, Bloomberg reported that the Trump Administration is making plans to ban flavored vaping products from the market.

E-cigarette and vaping companies need to be held responsible for how their products are being distributed, legally and illegally. There has to be a way to regulate products and make it more difficult for minors to get their hands on it.

Young adults however, should be responsible enough to know the consequences of their actions, and should strongly consider taking a second look at the possible damage they are doing to their bodies.

Almost every young adult that I know who engages in vaping or e-cigarette use tends to be very defensive about their behavior. They refuse to admit that their brain is developing an addiction to nicotine or THC. They refuse to consider that vaping has not been completely verified as a harmless activity.

Is it really worth potentially harming your body just so you can relieve stress and anxiety for one small fraction of the day? Vaping is still a relatively new activity and even experts still don’t know all of its effects or how it could do damage in the long run.