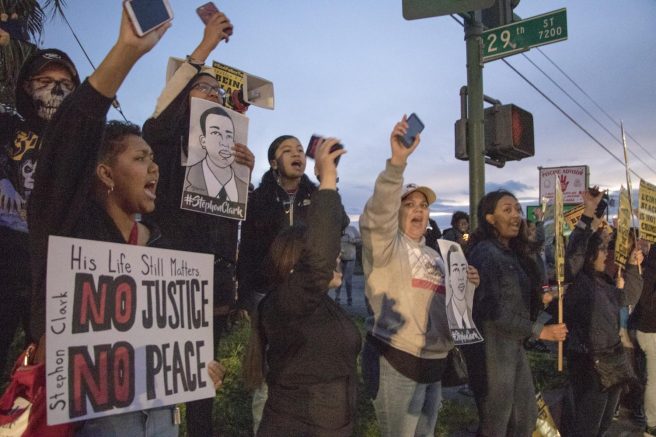 In recent years demonstrators have come together to protest tragedies such as the killing of Stephon Clark, but there is still more that should be done to help conflicts within the black community. (Photo by Ashley Hayes-Stone)

While the black community is becoming a more united front on the outside in recent years as a result of tragedies like the Stephon Clark shooting, I believe that the community can often forget about the allies they’ve always had standing right next to them facing similar issues.

Everyone praises white allies who speak out in times of injustice, but more often than not they have nothing to lose. It seems like when the media and society praises white allies, members of the black community that face similar issues and are trying to take on a similar role can be replaced.

In my experience, I’ve noticed that when a member of the black community who is of a lighter hue faces similar struggles and issues and they want to speak out on the topic, their stance is disregard because, while they face similar problems, the issues they face are not as “serious” or “don’t happen everyday.”

While groups like Black Lives Matter are forces that bring the community closer together, there are still issues that the black community needs to eliminate within itself.

I have noticed that members of the community will often disregard the issues that their lighter-skinned counterparts face because the problems they face are not broadcasted across media platforms.

I am not trying to eliminate the serious issues of police brutality and racial profiling that darker skinned members of the black community more often face, I am just shining a light onto similar issues that those who are on the lighter end of the black spectrum and have visible black features face.

I am aware that being lighter-skinned in the black community gives me an advantage in certain situations where those with darker skin may face problems, but I don’t think that skin color is the only factor that leads to racial discrimination.

While skin color is the first, and most obvious, way that people face discrimination there are other physical features such as hair texture and facial features that often tie the black community together.

In my case, I would think that it’s pretty clear that I am mixed. I have what would be considered black features, my nose and hair texture, which are hard for people to miss or for me to hide.

Ever since I was younger, I’ve felt a disconnect from the black community, like I didn’t fit or I wasn’t fully accepted and it didn’t matter if my physical features resemble those in the black community, I always found that whenever I brought up an issue that I was dealing with, in regards to race it was thrown out — like I was being to sensitive.

Even as I’ve grown up and become more secure in myself and accepted what I can’t change, whether it be hair texture of the shape of my nose, I still feel a sense of displacement in the black community.

I believe that the displacement that I feel stems from the issue of colorism that the black community has historically faced and still faces today.

Malcolm X spoke on the issue of colorism and he was focused on getting to the root of where the issue stems from.

Even in the 1960s people were aware of the divide that plagues the black community. While people are now trying to bring the whole community together, there are still issues with people being complacent and members of the community who are homophobic.

Until the black community can learn to fully except each part of the community and not inflict the own prejudices they wish to erase onto their own, the group will be unable to dismantle the injustices that they face.

Be the first to comment on "Does the Black community have a widening divide?"